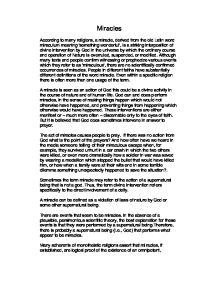 Miracles According to many religions, a miracle, derived from the old Latin word miraculum meaning 'something wonderful', is a striking interposition of divine intervention by God in the universe by which the ordinary course and operation of Nature is overruled, suspended, or modified. Although many texts and people confirm witnessing or prophecize various events which they refer to as 'miraculous', there are no scientifically confirmed occurrences of miracles. People in different faiths have substantially different definitions of the word miracle. Even within a specific religion there is often more than one usage of the term. A miracle is seen as an action of God this could be a divine activity in the course of nature and of human life. God can and does perform miracles, in the sense of making things happen which would not otherwise have happened, and preventing things from happening which otherwise would have happened. These interventions are either manifest or - much more often - discernable only to the eyes of faith. But it is believed that God does sometimes intervene in answer to prayer. The act of miracles causes people to pray. ...read more.

Some argue that miracles, if established, are evidence that a perfect God does not exist, as such a being would not want to, or need to, violate his own laws of nature. Catholic theologians do not accept this reasoning; they conclude that the miracles are from an omnipotent God, because they accept as already logically proven (through concepts like the prime mover) that there must be a single omnipotent, omniscient, God, when speaking philosophically. (However, Catholic theology does not depend on philosophical arguments for God, but rather Revelation.) Laws of nature are inferred from empirical evidence. Thus if an accepted law of nature ever appeared to have been violated, it could simply be that the accepted law was an erroneous inference from an insufficient set of empirical observations, rather than a supernatural disruption of the true course of nature. All claims of miracles are premature until such time as complete knowledge of all natural laws is held by all making and examining the claim and the miracle is demonstrated to be not natural. ...read more.

To show that they believe in him the people then go to Church and pray to him. The fact the miracle occurred the people "Thank God for that" is usually no more than an expression of heartfelt relief. Seriously devout believers who give God thanks for a lucky escape, or for recovery from a serious illness, or for the resolution of some problem, that the miracle helped them through. Often believe that they have experienced a divine intervention on their behalf, a miracle that confirms and strengthens their faith and evokes gratitude to God. You could say that there are many different types of miracles that might not make people believe in a God of sorts. These miracles are events that might be caused by human beings and not by a God. People might say that these so called miracles are not miracles but extraordinary people do things that might not be possible from ordinary people. Even these events might cause people to change the way that they act and become closer to believing in a God or deity. By changing they ways a person might improve a religious community by bring new ideas and enrich the atmosphere that it creates. ...read more.