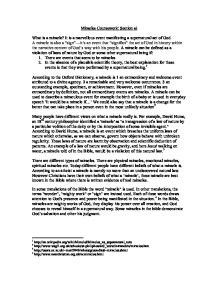 Miracles. Many people have different views on what a miracle really is. For example, David Hume, an 18th century philosopher identified a 'miracle' as &quot;a transgression of a law of nature

Miracles Coursework: Section ai What is a miracle? It is a marvellous event manifesting a supernatural act of God A miracle is also a "sign"-it's an event that "signifies" the act of God in history within the narrative context of God's way with his people. A miracle can be defined as a violation of laws of nature by God or some other supernatural being if: 1. There are events that seem to be miracles 2. In the absence of a plausible scientific theory, the best explanation for these events is that they were performed by a supernatural being.1 According to the Oxford Dictionary, a miracle is 1 an extraordinary and welcome event attributed to a divine agency. 2 a remarkable and very welcome occurrence. 3 an outstanding example, specimen, or achievement. However, even if miracles are extraordinary by definition, not all extraordinary events are miracles. A miracle can be used to describe a miraculous event for example the birth of a baby or is used in everyday speech 'It would be a miracle if...' We could also say that a miracle is a change for the better that can take place in a person even in the most unlikely situation2 Many people have different views on what a miracle really is. For example, David Hume, an 18th century philosopher identified a 'miracle' as "a transgression of a law of nature by a particular volition of the deity or by the interposition of some invisible agent." According to David Hume, a miracle is an event which breaches the uniform laws of nature which otherwise, as we can observe, govern how objects behave with unbroken regularity. These laws of nature are learnt by observation and scientific deduction of patterns. ...read more.

Christian's faith rests on Jesus and accepting him as the Saviour and Lord, this is one of the reasons the miracles stories are so important for Christians today, and it also indicates Jesus' presence in the world and in our lives. Christian miracles are closely linked with the faith, and it is through this faith the effect of healing are acknowledged. As mentioned in aii, the Miracles that Jesus performed were seen as supreme acts of kindness and many Christians today have faith in God and believe that miracles still take place around the world. This is because the Bible has recorded evidence of miracles that took place. Christians believe this as the Bible stands as proof of Miracles taken place. There have also been places in which miracles are believed to have occurred. One of the, most famous places is Lourdes, France. In 1858, in the grotto of Massabielle, near Lourdes in southern France, it is believed that Our Lady appeared 18 times to Bernadette Soubirous, a young peasant girl. She revealed herself as the Immaculate Conception, and asked the girl that a chapel should be built on the site of the vision. She told Bernadette to drink from a fountain in the grotto. No fountain was to be seen, but when Bernadette dug at a spot designated by the apparition, a spring began to flow. The water from this still flowing spring has shown remarkable healing power, though it contains no curative property that science can identify.5 Lourdes is now an international shrine to Our Lady and many people every year visit Lourdes in France in the belief that they will be healed. ...read more.

For example in the Bible there have been accounts of where a person is believed to have demons in them however today we know that the person was probably suffering from epilepsy however they didn't know it at the time. Another reason why many people today would agree with that statement is because it is well known that there are hundreds of places where a miracle is deserved, yet it does not happen. Innocent people die young of diseases like cancer which strike many people and it is in no way their fault, however God doesn't seem to help them very often. Therefore people will start to believe that healing miracles do not happen Many Christians would disagree with this statement as they believe in God and they believe that he still performs miracles. The Bible contains accounts of miracles taking place and so many Christians believe they still occur today. As mentioned in section B healing miracles have occurred in places such as Lourdes and there have been people who have claimed to have healing powers and these signs show that God is still amongst his followers and support many Christian beliefs that miracles happen today. For Christians, one of the ways to keep believing miracles still take place is to have an open mind, and not limit what God can do to what we feel comfortable with. The other is to believe only what has credible witnesses to back it, and fits what we know of God. We can more readily accept reports of things like healing the sick than tales of 'wonders' that bring no-one any real benefit. 1 http://en.wikipedia.org/wiki/Miracle#Miracles_as_supernatural_acts 2 http://www.wsgfl.org.uk/schools/st-philiphoward_www/intranet/re/miracles.htm 3 http://users.ox.ac.uk/~mert2049/atheistground/ash-miracles.shtml 4 http://www.newchristian.org.uk/ncmiracles.html 5 http://www.catholic.org/clife/mary/lourdes1.php 6 http://en.wikipedia.org/wiki/Anointing_of_the_Sick#Roman_Catholic_Church 7 http://www.crystalinks.com/maria.html ?? ?? ?? ?? ...read more.