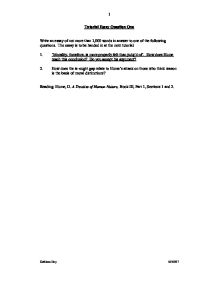 'Morality, therefore, is more properly felt than judg'd of'. How does Hume reach this conclusion? Do you accept his argument?

Hume maintains that if moral distinctions were based on relations discovered by reason, then non-reasoning and even inanimate objects would be capable of vice and virtue. For instance, it is morally wrong for a son to murder his father. However, "let us chuse any inanimate object, such as an oak or elm; and let us suppose, that by the dropping of its seed, it produces a sapling below it, which springing up by degrees, at last overtops and destroys the parent tree". The relations involved in the sapling killing the parent tree, and the son killing his father are the same. If relations alone were what constituted right and wrong, then the sapling would be guilty of murder - even if it was claimed that the sapling had no choice, as the relations would be the same. Another way in which reason could distinguish between right and wrong is by discovering a fact in an agent's character that makes their act virtuous or vicious. However, this is also not possible, according to Hume, as facts in the mind of a person are only vicious if the thoughts are actually implemented. ...read more.

Reason can never motivate, by itself, whereas morality is, Hume seems to say, intrinsically motivating, at least to some degree. His argument is as follows: 1. The judgment that some act is wrong, or that some passion is vicious, is intrinsically motivating in the sense that a person so judges only if she is motivated (or would be under certain conditions) against the action or passion to some degree. 2. Reason can only lead us to beliefs that such-and-such is the case, and no such belief is intrinsically motivating in this sense. 3. Therefore, no moral judgment can derive from reason. To say then, that morality is "more properly felt than judg'd of" is not the same as endorsing emotivism or non-cognitivism. It is simply to recognize the crucial role of sentiment in practical moral discovery. More generally, claiming that reason is unable to accomplish practical moral discovery is not the same as to claim that it has no role in the discovery of morals, that morals are invented rather than discovered, or that so-called moral judgments are not really judgments at all. ...read more.