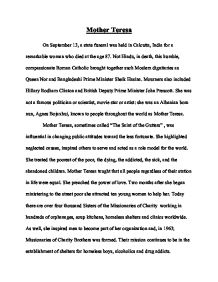 Mother Teresa On September 13, a state funeral was held in Calcutta, India for a remarkable woman who died at the age 87. Not Hindu, in death, this humble, compassionate Roman Catholic brought together such Moslem dignitaries as Queen Nor and Bangladeshi Prime Minister Sheik Hasina. Mourners also included Hillary Rodham Clinton and British Deputy Prime Minister John Prescott. She was not a famous politician or scientist, movie star or artist: she was an Albanian born nun, Agnes Bojaxhui, known to people throughout the world as Mother Teresa. Mother Teresa, sometimes called "The Saint of the Gutters" , was influential in changing public attitudes toward the less fortunate. She highlighted neglected causes, inspired others to serve and acted as a role model for the world. She treated the poorest of the poor, the dying, the addicted, the sick, and the abandoned children. Mother Teresa taught that all people regardless of their station in life were equal. ...read more.

British Co-Workers contributed over forty thousand dollars a month for flour to make bread and they arranged for one million Dapsone tablets to be sent each month for the treatment of leprosy . Not only did mother Teresa attract attention to the needs of the more than thirty thousand lepers living in the slums of Calcutta, but she also drew attention to the people afflicted with AIDS in the United States. With her support New York's first AIDS hospice was opened in New York City. She stated to the media, "We are not here to sit in judgement of these people, to decide blame or guilt. Our mission is help them, to make their dying days more tolerable..." Mother Teresa's popularity grew in the 1960's and 70's when there was much idealism and she was admired as someone who actually did something to help those in need. ...read more.

Many people are still alive today because of her caring and compassion. She herself lived a very humble existence giving all of her worldly goods over to her mission. She helped other people understand and give of themselves to those less fortunate. She was a great role model for many. She taught the world how to care for others rather then just themselves. Today, the world might not be as accepting of Mother Teresa as it was before. Since September 11, 2001, people have become more suspicious of those who hold strong religious beliefs and are more anxious to stamp out poverty rather than simply help its victims. Besides, there are fewer girls joining the order. The absence of Mother Teresa may be a factor, but generally, religious orders today are not drawing the numbers as in the past. After her death, French President Jacques Chirac summed up Mother Teresa's gifts to the world by saying, " This evening, there is less love, less compassion, and less light in the world. ...read more.