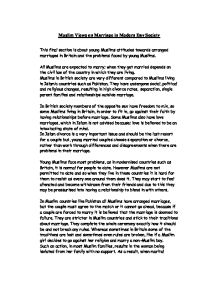 Muslim Views on Marriage in Modern Day Society This final section is about young Muslims attitudes towards arranged marriages in Britain and the problems faced by young Muslims. All Muslims are expected to marry; when they get married depends on the civil law of the country in which they are living. Muslims in British society are very different compared to Muslims living in Islamic countries such as Pakistan. They have undergone social, political and religious changes, resulting in high divorce rates, separation, single parent families and relationships outside marriage. In British society members of the opposite sex have freedom to mix, so some Muslims living in Britain, in order to fit in, go against their faith by having relationships before marriage. Some Muslims also have love marriages, which in Islam is not advised because; love is believed to be an intoxicating state of mind. In Islam divorce is a very important issue and should be the last resort for a couple but, young married couples choose separation or divorce, rather than work through differences and disagreements when there are problems in their marriage. ...read more.

An example of some of the problems that Muslims face in British society would be, some Muslims are not allowed to make any physical contact with the opposite sex. So if a Muslim was going for a job interview and the employer put their hand out to shake theirs, the Muslim would not be allowed to shake hands with them. This causes problems for Muslims to find work as even though it is for their religion the employer might find it rude and disrespectful and not give the Muslim the job just because of a minor thing. Also some young Muslims still face discrimination about their beliefs and their religious clothing. Muslim men have more freedom on who they can marry than Muslim women because, men can marry Christians and Jews but under no conditions is a Muslim woman permitted to marry anyone but a Muslim man. Muslim men can marry Christians and Jews because it is said that Christians and Jews share similar religious views and beliefs (e.g. ...read more.

According to traditional Islamic law, a man may take up to four wives, and each of those wives must have her own property, assets, and dowry. Usually the wives have little to no contact with each other and lead separate, individual lives in their own houses, and sometimes in different cities, though they all share the same husband. Thus, Muslim polygamy is traditionally restricted to wealthy men, and in some countries it is illegal for a man to marry multiple wives if he is unable to afford to take care of each of them properly. The Qur'an allows a man to have four wives at any one time. The Qur'an in verse 4:3 states: 'Marry women of your choice, two three or four; but if you fear you will not be able to deal justly with them then only one.' Muslims must go through a lot to become true Muslims and be committed to their religion. While living in the British society most Muslims still stay faithful to their religion and follow its rules, although sometimes they are pressurised into following the western ways. ...read more.