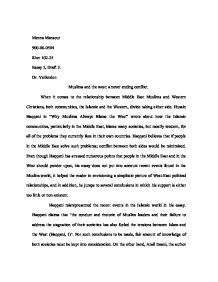 Muslims and the west: a never ending conflict.

Menna Mansour 900-06-0504 Rhet 102-25 Essay 2, Draft 3. Dr. Verlenden Muslims and the west: a never ending conflict. When it comes to the relationship between Middle East Muslims and Western Christians, both communities, the Islamic and the Western, divide taking either side. Husain Haqqani in "Why Muslims Always Blame the West" wrote about how the Islamic communities, particularly in the Middle East, blame many societies, but mostly western, for all of the problems they currently face in their own countries. Haqqani believes that if people in the Middle East solve such problems; conflict between both sides would be minimized. Even though Haqqani has stressed numerous points that people in the Middle East and in the West should ponder upon, his essay does not put into account recent events found in the Muslim world, it helped the reader in envisioning a simplistic picture of West-East political relationships, and in addition, he jumps to several conclusions in which his support is either too little or non-existent. Haqqani misrepresented the recent events in the Islamic world in his essay. ...read more.

Furthermore, Haqqani does not provide enough hard evidence and support to his mentioned issues and uses irrelevant pieces of information to support his ideas. For example, Haqqani uses the words "generally" and "usually" excessively, showing the audience that his argument is based on implications rather than on hard evidence, which decreases his credibility and shows his lack of support. For instance, the author mentions that "instead of hard analysis, which thrives only in a free society, Muslims are generally brought up on propaganda, which is often state-sponsored. This propaganda usually focuses on Muslim humiliation at the hands of others instead of acknowledging the flaws of Muslim leaders and societies (Haqqani)". In addition, Haqqani states that "the focus on external enemies causes Muslims to admire power rather than ideas. Warriors, and not scholars or inventors, are generally the heroes of common people (Haqqani)." This proves that once again, the author's lack of concrete support given to his claims, hence, diminishing his credibility. In addition, the foundation of the whole article's involvement to the topic is leaning more towards emotions rather than the statements of facts which could have given the essay a good and strong foundation. ...read more.

Also, the author of "The Roots of Muslim Rage" believes that another reason why Islam's rage increases throughout the years is because it all goes back to the westerners. Believing that Islamic communities were trying to imitate the west; however, the whole idea backfired. This attempt to imitate the West brought them poverty when they tried to change to the western economic style, tyranny when they tried to utilize the western political institutions, and defeat when they tried to make use of the western-style warfare (Lewis). This strong support by Lewis emphasizes one of the main reasons why Islam blames the west. Overall, the article "Why Muslims Always Blame the West" is not a strong one mainly because the author does not have firm and solid support to the claims he stated, Haqqani did not put into consideration the recent events that took place in the Islamic community and lastly he did not quite stress on the relationship between Islam and the west. Haqqani's article was mostly based on propositions or implications he made and was more emotional-oriented rather than leaning towards real life facts, thus decreasing his credibility towards his audience. ...read more.