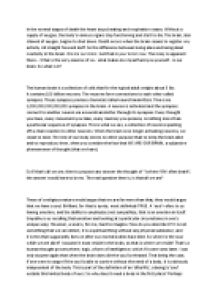 My Personal Theory on an Afterlife

﻿In the normal stages of death the heart stops beating and respiration ceases. Without a supply of oxygen, the body?s various organs stop functioning and start to die. The brain, also starved of oxygen, begins to shut down. Death occurs when the brain ceases to register any activity. All straight forward stuff. So the difference between being alive and being dead is activity in the brain. We are our brain. Get that in your brain now. The irony is apparent there? What is the very essence of us - what makes me myself and you yourself - is our brain. So what is it? The human brain is a collection of cells that for the typical adult weighs about 3 lbs. It contains 100 billion neurons. The neurons form connections to each other called synapses. These synapses produce chemicals called neurotransmitters. There are 1,000,000,000,000,000 synapses in the brain. A neuron is activated and the synapses connect to another neuron via a neurotransmitter through its synapses. Every thought you have, every movement you take, every memory you possess, is nothing more than a particular sequence of synapses. This is what we are, a collection of neurons sparking off a chain reaction to other neurons. When the brain is no longer activating neurons, we cease to exist. The rest of our body serves no other purpose than to keep the brain alive and to reproduce, then, when you consider the fact that WE ARE OUR BRAIN, a subjective phenomenon of thought (that we have). ...read more.

What else sets us apart from the animals? Some would say our appreciation of the arts, poetry, music, etc. I don't agree. I think that just comes with intelligence. In fact, it does. In particular, our ability to recognize music is probably the most damning evidence there is to anybody who counters this. Music is a weird thing. Here?s an interesting thought: what truly is more a result of intelligence then us dabbling about with frequencies? Music is stunning because of this. It is one of the most human things there is, that?s why it exists in every culture since we made flutes out of mammoth tusks. What else is there? Absolutely nothing at all! We think we have a ?soul?, we think we are 'superior' to the animals, we think there is some indefinable quality about us that sets us apart from the animals. Hogwash! We are just animals that got smart. Assuming for the sake of argument that we do possess a ?soul?, then the obvious question is where does it go when we die? Now we?re getting somewhere. I know what you?re thinking, it could go to heaven. So what and where is heaven? Well, consider this. I think it is safe to say that WE are the anomalies in this place that we?re in, the universe (as far as we can ? quite literally ? see with our eyes/feel for ourselves). If our intelligence (as in our ability to even debate this matter, for example) ...read more.

We can think. You can think up of something to counter just this and the theory too. But, to those who criticize, I say well done to you. Criticize, and bring out your own interpretations/theories. I can?t say anything to that. I?m just trying to say that, while it shows you have intelligence if you totally, utterly, 100%-disagree with what I have written, and think I?m just trying to write something for show/for the heck of it, you don?t have logic. I could be 100% right or wrong, so you can?t be adamant in totally dismissing this idea of mine. Damned if I know to be honest. I would just like to think that we have a soul and somehow live on after our earthly demise, but it?s just a nice thought to hang onto. It would however give meaning to our lives, and explain a reason for our existence. What I find hard to accept is the belief that somehow the human race is special, more than just an animal. Every living thing on Earth with a brain possesses logic too! Even animals have logic. We?ve seen it. Animals do make decisions based on facts their senses give them. Having said this, I believe that we need to investigate how life managed to evolve a brain? We are animals; we evolved out of the same primeval swamp as the rest of the animal kingdom. Getting smart/gaining intelligence is not in my view a passport to gaining a ?soul?. We all have ?it?, all of our planet?s living kingdom. ...read more.