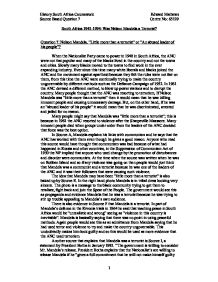 Nelson Mandela, &quot;Little more than a terrorist&quot; or &quot;An abused leader of his people&quot;?

South Africa 1945-1994: Was Nelson Mandela a Terrorist? Question 7: Nelson Mandela, "Little more than a terrorist" or "An abused leader of his people"? When the Nationalist Party came to power in 1948 in South Africa, the ANC were not that popular and many of the blacks lived in the country and not the towns and cities. Slowly many blacks moved to the towns to find work in the ever expanding industry. Ever since this time many white liberals and blacks joined the ANC and the movement against apartheid because they felt the rules were not fair on them, from this time the ANC were continually trying to make the country ungovernable by different methods such as the Defiance Campaign of 1952. In 1961 the ANC devised a different method, to blow up power stations and to disrupt the country. Many people thought that the ANC was resorting to terrorism, If Nelson Mandela was "little more than a terrorist" then it would mean that he was killing innocent people and causing unnecessary damage. But, on the other hand, if he was an "abused leader of his people" it would mean that he was discriminated, arrested and jailed for no reason. ...read more.

The answer is "...in some spheres of life, yes". Here Maisels is proving that Mandela was forced to work with the communists because of the unfair laws laid down for the black community. Source B also is on Mandela's side because Walter Sisulu talks about the NP being at its "high water mark" and there being, "no possibility of the Nationalists getting any stronger". This is on Mandela's side because it says nothing about Mandela doing anything wrong, only that the NP are on their last legs. But Sisulu would say this anyway because he was the Leader of the ANC and would not say anything different. In Source C Winnie Mandela describes her in her memoirs the police searches of her home in the 1950's. This is saying that Mandela is "an abused leader" because it implies that the police searched the Mandela's home for no good reason other than an excuse to put him in prison so that the ANC no loner was a threat to the NP. In the source Winnie says, "They couldn't find anything incriminating". This proves that Mandela was abused and was only trying to lead his people just like any other leader would do except to do this he had to motivate them. ...read more.

Even though he was using violence for what he believed in. The evidence for this is that Mandela was suspected even during the Treason Trial of being guilty and the reason they raided his home was to find evidence incriminating him, another reason is that even though he did not order the attacks he was blamed for them by the NP. The reason I do not think that the violence that the ANC used was terror is because the deaths that occurred during the bombings were probably not intended and the Mandela had no other choice than to resort to violence because there was no point in teaching peace when violence was inevitable. It is also clear that it was not terrorism because many people outside the country agreed that the NP should be kicked out of power and agreed with what Mandela was doing. The world did not look on the events with disgrace because they knew Mandela was fighting for a just cause. The truth is that Mandela slightly lost control of his people while he was in prison and this is why he would not admit to using violence in Source H and why he was blamed for the violence. Nelson Mandela was "an abused leader of his people" who resorted to violence instead of admitting defeat. History South Africa Coursework Edward Mathews Source Based Question 7 Centre No: 65129 1 ...read more.