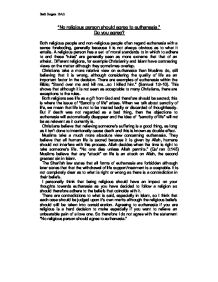 “No religious person should agree to euthanasia.”

Both religious people and non-religious people often regard euthanasia with a sense foreboding, generally because it is not always obvious as to what it entails. A religious person has a set of moral standards to in which to adhere to and these “rules” are generally seen as more extreme that that of an atheist. Different religions, for example Christianity and Islam have contrasting views on the matter although they sometimes overlap.

Christians take a more relative view on euthanasia than Muslims do, still believing that it is wrong, although considering the quality of life as an important factor in the decision. There are examples of euthanasia within the Bible; “Stand over me and kill me…so I killed him.” (Samuel 1:9-10). This shows that although it is not seen as acceptable to many Christians, there are exceptions to the rules.

Both religions see life as a gift from God and therefore should be sacred; this is where the issue of “Sanctity of life” arises. When we talk about sanctity of life, we mean that life is not to be treated badly or discarded of thoughtlessly. But if death was not regarded as a bad thing, then the objections to euthanasia will automatically disappear and the idea of “sanctity of life” will not be as relevant as it currently is.

Christians believe that relieving someone’s suffering is a good thing, as long as it isn’t done to intentionally cause death and this is known as double effect.

Muslims take a much more absolute view concerning euthanasia. They believe that all human life is sacred because it is given by Allah, humans should not interfere with this process. Allah decides when the time is right to take someone’s life. “No one dies unless Allah permits.” (Qu’ran 3:145) Muslims believe that any “attack” on life is an attack on Allah, the second greatest sin in Islam.

The Shari’ah law states that all forms of euthanasia are forbidden although later states that that the withdrawal of life support/treatment is acceptable. It is not completely clear as to what is right or wrong as there is a contradiction in their beliefs.

I personally think that being religious should have an impact on your thoughts towards euthanasia as you have decided to follow a religion so should therefore adhere to the beliefs that coincide with it.

There are contradictions to what is said, especially in Islam, so I think that each case should be judged upon it’s own merits although the religious beliefs should still be taken into consideration. Agreeing to euthanasia if you are religious is a hard decision to make especially if you want to relieve an unbearable pain of a love one. So therefore I do not agree with the statement “No religious person should agree to euthanasia.”