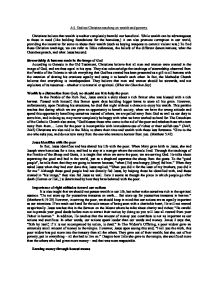 Ai). Outline Christian teaching on wealth and poverty. Christians believe that wealth is neither completely harmful nor beneficial. While wealth can be advantageous to those in need (like building foundations for the homeless,) it can also promote corruption in our world, providing the incentive for some to abuse their wealth (such as buying weapons to commit violent acts.) To find these Christian teachings, we can refer to Bible references, the beliefs of the different denominations, what the Churches preach, and what Jesus has said. Stewardship & humans made in the image of God According to Genesis in the Old Testament, Christians believe that all men and women were created in the image of God, and are thus equal in his eyes. They also acknowledge the teachings of stewardship observed from the Parable of the Talents in which everything that God has created has been presented as a gift to all humans with the intention of sharing his creations equally and using it to benefit each other. ...read more.

When Mary gave birth to Jesus, she and Joseph were homeless for a time, and had to stay at a manger where the animals lived. Through the teachings of the Parable of the Sheep and Goats, it is taught that when we serve the poor, we are serving God. He talks about separating the good and bad in the world, just as a shepherd separates the sheep from the goats. To the "good people", he tells them that they are going to heaven because, "when [He] was hungry, [they] fed him." When they asked Jesus when they had ever done this, Jesus replied, "When you did it for the least of my brothers, you did it for me." Although these good people had not directly fed Jesus, by helping those he identified with, and those created in "his image," they also fed Jesus as well. Here it seems as though the place in which people go after death (Heaven or Hell,) ...read more.

Earning money through honest means The Christian Church also preaches that although Christians do indeed have a duty to fill in terms of providing for themselves and their families, they must only gain their money through lawful and moral paths. This meaning of course, that no Christian should be involved in businesses that exploit people, such as the sex and gambling industries where money is obtained without honest work. The Catholic Church in particular detail that despite the amount of wealth and power you may obtain through whatever line of work, true happiness lies in none other, but God alone. In conclusion, Christians believe that we have a duty so serve the poor as we are all created in the image of God. They view wealth as neither intrinsically good nor evil, but believe that the wrong attitude can lead us to commit immoral acts. They also believe that we should consider our intentions when serving the poor and let our actions speak for our words, while gaining our wealth through honest means. (1036) ...read more.