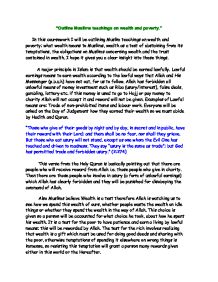 "Outline Muslims teachings on wealth and poverty." In this coursework I will be outlining Muslim teachings on wealth and poverty; what wealth means to Muslims, wealth as a test of abstaining from its temptations, the obligations on Muslims concerning wealth and the trust contained in wealth. I hope it gives you a clear insight into these things. A major principle in Islam is that wealth should be earned lawfully. Lawful earnings means to earn wealth according to the lawful ways that Allah and His Messenger (p.b.u.h) have set out, for us to follow. Allah has forbidden all unlawful means of money investment such as Riba (usury/interest), false deals, gambling, lottery etc. if this money is used to go to Hajj or pay money to charity Allah will not accept it and reward will not be given. Examples of Lawful means are: Trade of non-prohibited items and labour work. Everyone will be asked on the Day of Judgement how they earned their wealth so we must abide by Hadith and Quran. "Those who give of their goods by night and by day, in secret and in public, have their reward with their Lord; and them shall be no fear, nor shall they grieve. But those who eat usury will not stand, except as one whom the Evil One has touched and driven to madness. ...read more.

"It is He who has made you Khalifahs of the earth" (6:165) It has been commanded by Allah to share this wealth with others and we should do so as this wealth does not actually belong to us. Also it is obligatory on every Muslim to give Zakat as it is the third pillar of Islam, Zakat is the given of a set proportion of one's wealth to charity. It is regarded as a type of worship and purification of oneself and his wealth. It is not charitable gifts given due to kindness but it is the actual giving of 2.5% of one's wealth (cash, gold, silver and commercial items ONLY, rates vary depending on the item of wealth) each year in charity. It is a duty to help Muslims in need. This wealth does not actually belong to us but it belongs to Allah so we have this duty to share it. It is said in the Quran: "Zakah is for the poor, and the needy and those who are employed to administer and collect it, and the new converts, and for those who are in bondage, and in debt and service for the cause of Allah, and for the wayfarers, a duty ordained by Allah, and Allah is the All-Knowing, the Wise" (9:60) ...read more.

Wealth is very important to Muslims, because firstly Muslims believe wealth should be earned by lawful means (to earn wealth according to the lawful ways that Allah and His Messenger (s.a.w) have set out, for us to follow) and not by unlawful means otherwise it will be a major sin. Secondly, Muslims believe wealth is a test, Allah is the true owner of all wealth, since it is not ours it is a duty upon Muslims to share the wealth and not to be tempted to waste it on idle things. Thirdly, Muslims believe wealth is a trust, because this wealth was given by Allah as a trust and it will be a major sin if one betrays this trust by not spending it properly and not sharing this wealth and as Khalifahs (Trustees) it is a job of ours to do so. Fourthly, it is an obligation on all Muslims to pay Zakah, as before the wealth it not ours so it should be shared, whosoever does not pay Zakah is committing a great sin because Zakah is regarded as the third pillar of Islam. Fifthly, Sadaqah, which is a voluntary, ongoing charity and can be given in addition to Zakah, Sadaqah can be done in many different ways e.g. removing something harmful from the path of another person. These are all teachings mentioned in the Quran and Hadith so it important for Muslims to realise the virtues and the sins in all of these. ...read more.