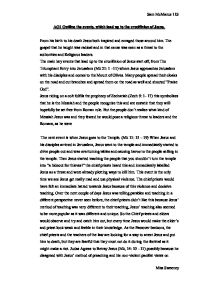 Outline the events, which lead up to the crucifixion of Jesus.

AO1 Outline the events, which lead up to the crucifixion of Jesus. From his birth to his death Jesus both inspired and enraged those around him. The gospel that he taught was radical and in that sense was seen as a threat to the authorities and Religious leaders. The main key events that lead up to the crucifixion of Jesus start off, from The Triumphant Entry into Jerusalem (Mk 21: 1 -11) where Jesus approaches Jerusalem with his disciples and comes to the Mount of Olives. Many people spread their cloaks on the road and cut branches and spread them on the road as well and shouted "Praise God". Jesus riding on a colt fulfils the prophecy of Zechariah (Zech 9: 1- 17) this symbolises that he is the Messiah and the people recognise this and are ecstatic that they will hopefully be set free from Roman rule. But the people don't realise what kind of Messiah Jesus was and they feared he would pose a religious threat to leaders and the Romans, as he were The next event is when Jesus goes to the Temple. ...read more.

So the Chief priests and elders would observe and try and catch him out, but every time Jesus would make the elder's and priest look weak and feeble in their knowledge. As the Passover beckons, the chief priests and the teachers of the law are looking for a way to arrest Jesus and put him to death, but they are fearful that they must not do it during the festival as it might make a riot. Judas Agrees to Betray Jesus (Mk, 14: 10 - 11) possibly because he disagreed with Jesus' method of preaching and his non-violent pacifist views on things, or even it might be just sheer greed of the prospect of having money. Jesus eats the Passover meal on Holy Thursday, an event that is recreated at every celebration of the Eucharist. After this Jesus goes to Gethsemane he takes his three favourite disciples (Peter, James and John) to keep watch while he prays, while Jesus was praying Jesus experienced pain, distress and anguish and he asked God to "Take this cup of suffering away from me. ...read more.

They were all making up lies and all their stories conflicted with one another, when Jesus said he was the Messiah they claimed blasphemy upon Jesus and voted that he should be sentenced to die. This strength shown by Jesus is contrasted with the weakness of Peter who denied him. (Mk 15:1 - 5) The chief priests and elders handed Jesus over to Pilate to be tried. Pilate is unsettled by Jesus. He doesn't feel able to sentence him to death and washes his hands to symbolise that he did not want to be held responsible even though he agrees to the death sentence. The teachers of the laws and the chief priests didn't like how Jesus taught and preached and showed up the laws and customs, so all these people were immediately against Jesus and were thinking desperately of some way to sentence him to death. But you have to think that what did Jesus do to deserve to be crucified? All he did was preach and make people think and give his own point of view on a harsh society with harsh rituals and harsh laws. Sam McManus 11S Miss Sweeney ...read more.