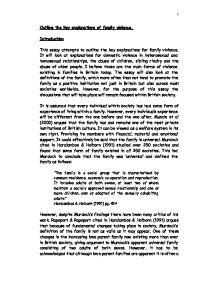 Outline the key explanations of family violence. Introduction This essay attempts to outline the key explanations for family violence. It will look at explanations for domestic violence in heterosexual and h********l relationships, the abuse of children, sibling rivalry and the abuse of older people. I believe these are the main forms of violence existing in families in Britain today. The essay will also look at the definitions of the family, which more often than not tend to promote the family as a positive institution not just in Britain but also across most societies worldwide. However, for the purpose of this essay the discussions that will take place will remain focused within British society. It is assumed that every individual within society has had some form of experience of living within a family. However, every individuals experience will be different from the one before and the one after. Muncie et al (2000) argues that the family has and remains one of the most private institutions of British culture. It can be viewed as a welfare system in its own right. Providing its members with financial, material and emotional support. It could effectively be said that the family is universal. Murdock cited in Haralambos & Holborn (1991) studied over 250 societies and found that some form of family existed in all 250 societies. This led Murdock to conclude that the family was 'universal' and defined the family as follows: "The family is a social group that is characterised by common residence, economic co-operation and reproduction. It includes adults of both sexes, at least two of whom maintain a socially approved s****l relationship and one or more children, own or adopted of the s******y cohabiting adults" Haralambos & Holborn (1991) pg.454 However, despite Murdock's findings there have been many critics of his work. Rapoport & Rapoport cited in Haralambos & Holborn (1991) argues that because of fundamental changes taking place in society, Murdock's definition of the family is not as valid as it may appear. ...read more.

Domestic violence is the second most common from of serious family violence the first is child abuse. Child abuse While child abuse, particularly over the past 20 years has been put back on the political agenda and constructed as one of the major social problems of our time Muncie et al (2000) argues that figures still remain extremely high. Muncie et al (2000) argues that the figures for child abuse as reported by the NSPCC suggested in 1996 over 15000 children in great Britain were reportedly abused. However, it could be argued that this figure could be far greater because of under reporting. Of this figure about 3/5's were physically harmed and the rest s******y molested. Child abuse was defined by Gelles & Loseke (1993) as neglect or physical, emotional or s****l abuse or exploitation of a child by a parent or caretaker. There have been many arguments as to why violence towards children occurs within the family. Gelles & Loseke (1993) argue that people who abuse children in their care were often abused themselves as children. However this theory can be strongly contested as Dallos & Mclaughlin (1995) argue many parents who were abused in childhood often provide their own children with a loving, supportive environment, where the child's needs are met safe from harm. Giddens (1992) argues there are many stresses in families that have a negative impact on a child's development or health. Social exclusion is one of these factors - lone parents are often one group that faces such exclusion. Gelles (1997) in a study of child abuse argued that abuse was higher in lone parent families than in two parent families. Gelles (1997) points to the reason of poverty to explain the high rates of abuse in lone parent families. Gellles (1997) argues that lone parents lack a wage earner; often live in poor housing conditions which in turn can lead to stress and frustration in the parent who in turn may take it out on their children. ...read more.

If a woman with children does decide to leave a violent relationship then she is required by law to seek some form of support from the children's father in the form of maintenance. This could lead to further problems and dangers for the woman and her child/ren in the form of repercussions from the abusive partner. If the woman does not comply with this requirement then benefits she is entitled to could be reduced forcing them further into poverty. This is just one typical case where the state lets such families down. However although family violence is still kept to the private domain of the family it is no longer tolerated by outside agencies such as health workers police courts etc. It is still sad to say though that in the 21st century male power within families is still apparent although this is to a lesser degree these days. However, the power that parents exert over children is still not being called in to question enough, if it was would so much abuse exist? This is also true for elder abuse, as we live in an aging population more and more older people are finding themselves at risk of abuse from their loved ones. May be this could be because of initiatives such as care in the community while on paper this looks like a good idea in practice all it is effectively doing is shifting responsibility from the state to families. This area is very much under researched as is the areas of sibling rivalry and same s*x violence. More research is desperate for all these areas in order to provide adequate services and develop effective social services. Giddens (1992) argues that to end family violence in the short term we need to be more vigilant and provide more refuges for victims of family violence. In the long term we need to strengthen social polices that will release all vulnerable victims of family violence from the society created status as the victims of violence and domination 9 ...read more.