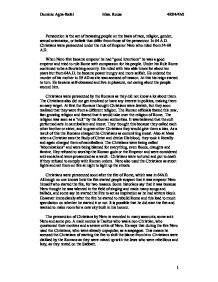 Persecution is the act of harassing people on the basis of race, religion, gender, sexual orientation, or beliefs that differ from those of the persecutor. In 64 A.D. Christians were persecuted under the rule of Emperor Nero who ruled from 54-68 A.D.

Persecution is the act of harassing people on the basis of race, religion, gender, sexual orientation, or beliefs that differ from those of the persecutor. In 64 A.D. Christians were persecuted under the rule of Emperor Nero who ruled from 54-68 A.D. When Nero first became emperor he had "good intentions" he was a good emperor and tried to rule Rome with compassion for his people. Under his Rule Rome continued to be a flourishing country. He ruled with two able tutors for about ten years but from 64A.D. he became power hungry and more selfish. He ordered the murder of his mother in 59 AD as she was accused of treason. At this his reign started to turn. He became self-obsessed and live in pleasure, not caring about the people around him. Christians were persecuted by the Romans as they did not know a lot about them. The Christians also did not get involved or have any interest in politics, making them an easy target. At first the Romans thought Christians were Jewish, but they soon realized that they were from a different religion. The Roman officials feared this new, fast growing religion and feared that it would take over the religion of Rome. The religion was seen as a "cult" by the Roman authorities. It was believed that the cult performed acts in cannibalism and incest. They thought this because they called each other brother or sister, and to greet other Christians they would give them a kiss. ...read more.

This is a trait shown by some followers when they cower and run. Although they want to worship Jesus and die for Him, they are too scared and not ready to. Finally Mark talks about when James and John ask Jesus who will be on His right hand side, Jesus says that it is not His power to decide and says that "to be first you must put yourself last, and to be great you must be the servant of others;. For even the Son of God came, not to be served but to serve." This shows that followers must help each other and be humble. The life and Death of Jesus can inspire, comfort and even encourage persecuted Christians. There are many examples of Jesus doing this in Mark's and Luke's Gospels. In Mark 8:31-38 Jesus says that, if any one loses their life for Him they will be saved and whoever wants to save his life will lose it. He says "what good is it to gain the whole world but lose his soul," This shows us that if we wish to suffer for Jesus we will lose our life, but will be saved. This is encouraging because here we know that we will go to Heaven and have eternal life. In Mark 14:32-46, it shows us that even Jesus had doubts about giving Himself to us, but he overcame this when he said "take this cup from me" as he was prepared to give himself for us. ...read more.

However, during this time things were desperate and unpredictable. What if Nazi Europe was a reality, what would become of Christianity? So, if he was successful maybe the ends would justify the means. Another example of Christians being prepared to suffer like Jesus was Maximilian Kolbe. He was born in 8th January 1894in Zdanska Wola, Poland. He set up a new body called Militia Immaculatae, who taught people about the Virgin Mary. He had his lectures in Fransiscisan . Until 1927, when he acquired his own set of land, near Warsaw where his lectures took place. When war came Kolbe was captured and sent to Auschwitz. Here he was known to give up his food for others event when it was evident, that he was seriously ill. He helped confessions an even performed Mass. However, his most famous deed was in 1941, when a prisoner escaped and ten men were chosen to be executed as punishment. Kolbe volunteered to be one of the ten when he one man say my "poor wife and children," After two weeks of starvation, on the 14th August 1941 Kolbe was consciously administered a lethal injection. Kolbe was considered a martyr, not of faith but charity. He died for his love for others during most of his life he taught and sacrificed himself for another. Both men are martyrs because they both gave their lives for others, with a Christian mentality. Dietrich Bonhoeffe wanted to protect Europe from becoming fascist even if it was in vain; Kolbe gave his life so another man could live. Dominic Agha-Rafei Miss. Rouse 4RE4/4MI 1 ...read more.