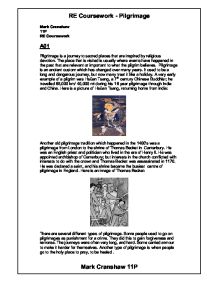 Pilgrimage is an ancient custom which has changed over many years. It used to be a long and dangerous journey, but now many treat it like a holiday

Mark Cranshaw 11P RE Coursework A01 Pilgrimage is a journey to sacred places that are inspired by religious devotion. The place that is visited is usually where events have happened in the past that are relevant or important to what the pilgrim believes. Pilgrimage is an ancient custom which has changed over many years. It used to be a long and dangerous journey, but now many treat it like a holiday. A very early example of a pilgrim was Hs�an Tsang, a 7th century Chinese Buddhist; he travelled 65,000 km/ 40,000 mi during his 16 year pilgrimage through India and China. Here is a picture of Hs�an Tsang, returning home from India: Another old pilgrimage tradition which happened in the 1400's was a pilgrimage from London to the shrine of Thomas Becket in Canterbury. He was an English priest and politician who lived in the era of Henry II. He was appointed archbishop of Canterbury; but interests in the church conflicted with interests to do with the crown and Thomas Becket was assassinated in 1170. He was declared a saint, and his shrine became the busiest centre of pilgrimage in England. Here is an image of Thomas Becket: There are several different types of pilgrimage. Some people used to go on pilgrimages as punishment for a crime. They did this to gain forgiveness and remorse. The journeys were often very long, and hard. Some carried armour to make it harder for themselves. Another type of pilgrimage is when people go to the holy place to pray, to be healed. ...read more.

Here are some pictures taken in the Holy land. * Mecca For Hindus, the holy places include Varanasi and the purifying river Ganges; for Buddhists, the places connected with the crises of Buddha's career; for the ancient Greeks, the shrines at Delphi and Ephesus, among others; for Jews, the Western Wall in Jerusalem; for Christians, Lourdes and Canterbury as well as Bethlehem, Galilee and Jerusalem; and for Muslims, Mecca and Medina. Mecca is used as a place of pilgrimage as it was the birthplace of Muhammad. It is the holiest city of the Islamic world. In the centre of Mecca is the Great Mosque, in the courtyard of which is the Kaaba, the sacred shrine containing the black stone believed to have been given to Abraham by the angel Gabriel. Mecca has an annual pilgrimage, this is known as Hajj. Many of the Muslims wear white robes on their pilgrimage. The majority of the pilgrims congregate at the top of Mount Arafat to pray. A pilgrimage to Mecca that should be undertaken by every Muslim at least once in a lifetime, unless he or she is prevented by financial or health difficulties. A Muslim who has been on hajj may take the additional name Hajji. Many of the pilgrims on hajj also visit Medina, where the prophet Muhammad is buried. The Hajj is one of the five pillars: the five duties required of every Muslim: 1) Repeating the creed, which affirms that Allah is the one God and Muhammad is his prophet 2) ...read more.

All places are becoming more commercialised so it is normal for places of pilgrimage to become commercialised too. Both the pilgrimage sites and area surrounding the places are becoming commercialised. But does this commercialisation take anything out of the pilgrimage? I think that a bit of commerce does not take anything away from the experience. Now we could not cope going on holiday without hotels, shops, cafes and transport. Commerce in a way could help people enjoy the pilgrimage. They can take guided tours from people that know the area well and commerce helps to make the pilgrims stay as comfortable and enjoyable as possible. In many ways commerce can help benefit the people living in the place of pilgrimage (money from tourism) and also the pilgrims visiting the place (comfort and enjoyment) I understand that many Christians disapprove of the commerce at the pilgrimage sites, mainly because of Jesus' views on them but also because they believe that the people living there are making a living and benefiting from God and Jesus and that they think this is wrong. I also understand that many Christians wish to keep the pilgrimage sites traditional and are afraid of these places becoming too commercialised and turning into an attraction for other non believes, for example a shopping attraction I believe that a Christian should be able to see pilgrimage centres for what they really are and ignore what they want to but concentrate on getting the most out of their pilgrimage journey. If they want to use the commercial aspects of the trip then that is alright. It is their choice. RE Coursework - Pilgrimage Mark Cranshaw 11P ...read more.