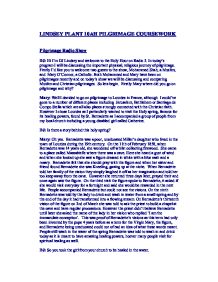 LINDSEY PLANT 10AH PILGRIMAGE COURSEWORK Pilgrimage Radio Show DJ: Hi I'm DJ Lindsey and welcome to the Holy Hour on Radio 5. In today's program I will be discussing the important physical, religious journey of pilgrimage. Firstly I'd like you to welcome two guests to the show, Mohammed Shah, a Muslim, and Mary O'Connor, a Catholic. Both Mohammed and Mary have been on pilgrimages recently and on today's show we will be discussing and comparing Muslim and Christian pilgrimages. So lets begin. Firstly Mary where did you go on pilgrimage and why? Mary: Well I decided to go on pilgrimage to Lourdes in France, although I could've gone to a number of different places including Jerusalem, Bethlehem or Santiago de Compo Stella which are all also places strongly connected with the Christian faith. However I chose Lourdes as I particularly wanted to visit the Holy spring, famous for its healing powers, found by St. Bernadette as I accompanied a group of people from my local church including a young disabled girl called Catherine. DJ: Is there a story behind this holy spring? Mary: Oh yes. Bernadette was a poor, uneducated Miller's daughter who lived in the town of Lourdes during the 19th century. On the 11th of February 1858, when Bernadette was 14 years old, she wondered off whilst collecting firewood. She came to a place called Massabielle where there was a cave. Here she heard a gust of wind and when she looked up she saw a figure dressed in white with a blue sash and a rosary. Bernadette felt that she should pray with the figure and when her sister and friend found Bernadette she was Kneeling, gazing up at the niche. When Bernadette told her family of the vision they simply laughed it off as her imagination and told her too keep away from the cave. However she returned three days later, prayed their and once again saw the figure. ...read more.

When saying the rosary prayers in such a unique and holy place I felt a special feeling of closeness and devotion to the Virgin Mary and also to God which was quite inexplicable. As well as the activities in the churches in Lourdes there were also outdoor activities in which everyone, including the handicapped pilgrims, could take part. We took part in a candlelight procession through the town. During this procession everyone held candles to represent how Jesus was the light of the world and to represent how there was a special feeling of a presence of God. Whilst this procession took place everyone sung the hymn 'Ave Maria' (hail Mary) which is the hymn devoted to the blessed Virgin Mary. These kinds of activities really gave me time to think of my religion in different ways rather than simply sitting in a church. They also made it easier to make friends with other pilgrims and talk about why they came on pilgrimage and what there religion means to them. I think that Catherine's favourite part of our pilgrimage to Lourdes was visiting the fourteen stations of the cross which are fourteen statues which represent the fourteen stages which Jesus Christ went through before he was put to death on the cross. The fourteen stations of the cross have been built outside in the woods in Lourdes in a kind of trail format. I think Catherine particularly liked this experience as it would usually be hard for her to go into woods but with everyone so willing to help it was not a problem here. I also thought it was a good idea to have somewhere where you can worship God whilst surrounded by all of his beautiful creatures and creations because it really made me think of just how powerful and creative God is. Also some people visited the stations of the cross without wearing any shoes or socks. ...read more.

Mohammed: Well I feel that I have performed a great duty to Allah by going on pilgrimage and I feel that I have submitted to him as much as I possibly could. I think that I have gained a very strong sense of Umma from going on pilgrimage to Mecca as everyone there was so equal and brotherly. I also feel quite relieved that I have confessed my sins to Allah and feel now that I can pray more easily after praying on the plains of Arafat for so long. I am also very happy that I have finally visited Mecca and seen the Kaba which I have prayed to everyday for so long and I consider it a privilege to be able to use the title of Hajji. DJ: Well it has been very interesting listening to both Mary's and Mohammed's accounts of a pilgrimage to Lourdes and a pilgrimage to Mecca but the two pilgrimages were surprisingly different to one another. The Muslim pilgrimage was very much in honour of Allah as the it was a duty to go at least once and the activities which Mohammed had to do were compulsory and in particular order, whereas Mary decided herself to go on pilgrimage and what she would do once she got there. Both Mary and Mohammed gained important things from their pilgrimages Mohammed gained more relief from his pilgrimage where as Mary gained more enthusiasm about her faith, however both seemed to gain a sense of having a faith community and a sense of everyone being more equal. Both pilgrims visited places in remembrance of religious events to do with their religion and both places had special facilities for the disabled which was one of the main things which brought about the sense of unity as everyone could do everything on each pilgrimage. But anyway that's all we have time for so we'll have to say goodbye to Mary and Mohammed and I'll see you next week on the Holy Hour for an in depth discussion of child and believers baptisms. Goodbye. ?? ?? ?? ?? ...read more.