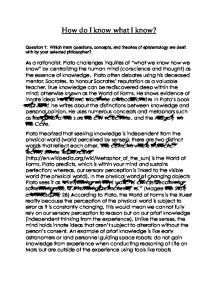 How do I know what I know? Question 1: Which main questions, concepts, and theories of epistemology are dealt with by your selected philosopher? As a rationalist, Plato challenges inquiries of "what we know how we know" by centralizing the human mind (conscience and thought) as the essence of knowledge. Plato often debates using his deceased mentor, Socrates, to honour Socrates' reputation as a valuable teacher. True knowledge can be rediscovered deep within the mind; otherwise known as the World of Forms. He shows evidence of innate ideas in Platonic Doctrine of Recollection. In Plato's book Republic he writes about the distinctions between knowledge and personal opinion. He uses numerous concepts and metaphors such as metaphor of the sun, the divided line, and the Allegory in the Cave. Plato theorized that seeking knowledge is independent from the physical world (world perceived by senses), there are two distinct worlds that reflect each other. "The domain where truth and reality shine resplendent," (http://en.wikipedia.org/wiki/Metaphor_of_the_sun) is the World of Forms, Plato predicts, which is within your mind and sustains perfection; whereas, our sensory perception is linked to the visible world (the physical world). In the physical world of changing objects Plato sees it as "Everything in this world is always becoming something else, but nothing permanently is." (Magee The Story of Philosophy 28) According to Plato, the World of Forms is the truest reality because the perception of the physical world is subject to error as it is constantly changing. This would mean we cannot fully rely on our sensory perception to reason but on our priori knowledge (independent thinking from the experience). Unlike the senses, the mind holds innate ideas that aren't subject to alteration without the person's consent. An example of priori knowledge is like early astronomers or land personnel guiding space robots; do not gain knowledge from experience when conducting reasoning of Life on Mars but are outside of the experience using tools like robots In understanding Plato's Ideals and Forms, he moulds the ...read more.

Stage 2: clearly perceive objects and patterns. This stage can be difficult to overcome as everything comes down to an individual's perception. Plato's advice is to distinguish the ideals from the actual. This suggests reasoning rather than accepting the physical world's images. He argues knowledge requires immense thinking. The conclusion that comes with those thoughts can be false as well as true because "Knowledge is true opinion". (http://equotes.wetpaint.com/page/Plato+Quotes) Although this is true, false thoughts are not thoughts of two different things (Theatetus and Theodorus); they're mere misidentification, neither true nor false. The prisoner viewing the new world has to make a distinction as to what his senses tell him. Something unearthly as his experience could be seen as unreal or as a dream. In order to proceed, he must use his own reasoning to separate what he perceives to be true and false Stage 3: True Knowledge and how to sustain it The last stage entails what one does with true knowledge. Plato explains that individuals who reason their way to this stage arrive at true knowledge of the forms; they're bound to the invisible World of Forms. The prisoner should be able to create principles for himself to base his new reality on. The theory of Forms provides the enlightened prisoner with timeless truths, intellectual knowledge and conceptual certainties to shape his perspective. Timeless truth will allow the prisoner to make significant suggestions and/or conclusions about particular things and depict their nature (true or false). Those entities hold timeless truths or lies and require scrutiny. The prisoner's intellectual knowledge is first received by the senses and is based on the prisoner's intellect to justify what he sensed. Lastly, the prisoner must remember with concepts like Forms and Ideals for positive consideration there is negative consideration. There is no certainty in this world; only the prisoner can decide whether the cave or the physical world is reality. ...read more.

My two views take on a scientific and philosophical point of view. Scientifically, the brain creates new memories subconsciously and stores them within the mind. The more range of information over the year, the more equipped the brain becomes to sustain itself among the clutters of information one must absorb in a school year for example. To counter Plato's Doctrine of recollection one has the ability to solve a geometry question if given the chance. The solution was not within the slave, rather within the intelligence and patience required allowing him to solve the area of the square. Noam Chomsky made a related note to Plato's doctrine of recollection when debating that children's communication skills are hard-wired into humans. What Chomsky or Plato didn't know about hard-wired knowledge is that a child's main focus at a young age is to be a part of society. He wants the attention his dad or sister holds because he is being treated unequally. Therefore a lot of the child's performance relies on social pressures to quickly emerge as another acceptable being in the universe. Plato made a reasonable theory up to there, but going as far as stating that the brain that once held knowledge is trapped deep within the mind once a mind is placed in the body requires me to believe supernatural information and has me rejecting the concept and applying my own justification to his statement. To my reasoning, Plato invoked his own feelings rather than logic into the theory and made it very difficult to conceive for people of different beliefs, economic, and backgrounds. Plato was able to encourage many individuals to expose themselves to the abstract World of Forms. He created a foundation for other philosophers to question and progress in his direction. His teachings are more than theories, concept, and debate but a way of life for followers who wish to progress towards a higher realm, prisoners who wish to no longer be chained down in a cave. ...read more.