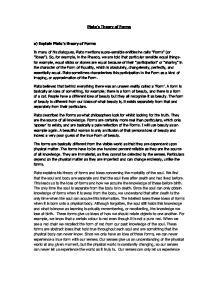 Plato's Theory of Forms a) Explain Plato's theory of Forms In many of his dialogues, Plato mentions supra-sensible entities he calls "Forms" (or "Ideas"). So, for example, in the Phaedo, we are told that particular sensible equal things-for example, equal sticks or stones are equal because of their "participation" or "sharing" in the character of the Form of Equality, which is absolutely, changelessly, perfectly, and essentially equal. Plato sometimes characterizes this participation in the Form as a kind of imaging, or approximation of the Form. Plato believed that behind everything there was an unseen reality called a 'Form'. A form is basically an idea of something, for example; there is a form of beauty, and there is a form of a cat. People have a different idea of beauty but they all recognise it as beauty. The form of beauty is different from our ideas of what beauty is, it exists separately from that and separately from their particulars. Plato described the Forms as what philosophers look for whilst looking for the truth. ...read more.

When we see a red chair we recollect the form of red from our past knowledge of the soul. These forms are abstract ideas that hold true throughout each soul and are something that the physical body can never know. Since we only have an idea of these forms, we can never experience a true form with our senses. Our senses give us an understanding of the physical world at any given moment, but the physical world is constantly changing, so our senses can never let us experience the world as it truly is. Our senses can only let us experience how the world as we know it in a particular moment. The soul acts as a container for this knowledge and keeps it through each bodily life. One argument against these ideas is that the soul would not be strong enough to survive the destruction of the body. This cannot be true, as the soul directly controls the motions of the body; for the soul can will the body in any way it chooses and may oppose the body at any point. ...read more.

According to Plato "The forms are not concepts in the mind, but are existing realities apart from the mind. The forms are eternal and immutable". Forms are imperfectly reflected in human affairs, and language limits us in how we can explain these forms. The forms are "out there" somewhere. The world from which these forms are described to come from is not one that can be viewed by the human eye but is visible as pattern. We can believe in the existence of ideal standards without claiming to possess them. The belief in an absolute that we do not possess is often the best way to understand the concept of it. To show, how the theory could be convincing. Every person has an idea of what perfection is, however can never match this perfection. In the theory of forms it states that our souls have been to this place and so we have the knowledge but it lays dormant or unreachable in our minds. This backs up the fact that human perfection can never be matched. Thus making the theory convincing."The forms are not concepts in the mind, but are existing realities" meaning there is another 'world' in which these forms are active and real. ...read more.