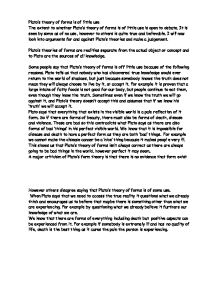 Plato’s theory of forms is of little use

The extent to whether Plato’s theory of forms is of little use is open to debate. It is seen by some as of no use, however to others is quite true and believable. I will now look into arguments for and against Plato’s theories and make a judgement.

Plato’s theories of forms are realities separate from the actual object or concept and to Plato are the sources of all knowledge.

Some people say that Plato’s theory of forms is off little use because of the following reasons. Plato tells us that nobody who has discovered true knowledge would ever return to the world of shadows, but just because somebody knows the truth does not mean they will always choose to live by it, or accept it. For example it is proven that a large intake of fatty foods is not good for our body, but people continue to eat them, even though they know the truth. Sometimes even if we know the truth we will go against it, and Plato’s theory doesn’t accept this and assumes that if we know his ‘truth’ we will accept it.

Plato says that everything that exists in the visible world is a pale reflection of it form. So if there are forms of beauty, there must also be forms of death, disease and violence. These are bad so this contradicts what Plato says as there are also forms of bad ‘things’ in his perfect visible world. We know that it is impossible for disease and death to have a perfect form as they are both ‘bad’ things. For example we cannot make the disease cancer be a ‘nice’ thing because it makes people very ill. This shows us that Plato’s theory of forms isn’t always correct as there are always going to be bad things in the world, however perfect it may seem.

However others disagree saying that Plato’s theory of forms is of some use.

When Plato says that we need to access the true reality it questions what we already think and encourages us to believe that maybe there is something other than what we are experiencing. For example by questioning what we already believe it furthers our knowledge of what we are.

We know that there are forms of everything including death but positive aspects can be experienced from it. For example if somebody is extremely ill and has no quality of life, death is the best thing as it cures the pain the person is experiencing.

In conclusion I think that Plato’s theories have some truthfulness but also leave us with many unanswered questions e.g. what is perfect, how do we know when we have accessed the true reality.

Forms enable us to recognise things in the visible world; they are not subject to change and are totally eternal. Forms are immaterial, meaning we can never detect them with any of our senses. Forms are true reality and Plato compares this to the sun which he calls the “Highest Form of Good”.