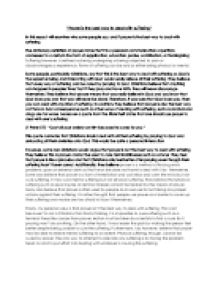 Prayer is the best way to deal with suffering. Discuss

Moreover a quote from the Bible itself states that one should use prayer to deal with one's suffering: (1 Peter 5:7) "Cast all your anxiety on him because he cares for you." This quote connotes that Christians should deal with all their suffering by praying to God and unloading all their anxieties onto God. This would be quite a personal interaction. However, some non-Christians would argue that prayer is not the best way to deal with suffering. They believe this as prayer cannot be used to cure terminal illnesses such as cancer. They feel that prayer is like a placebo and that Christians only feel better after praying even though their suffering hasn't been cured. ...read more.

Finally, my personal view is that prayer isn't the best way to deal with suffering. This is not because I'm not a Christian. Practically thinking, it is impossible to cure suffering such as a terminal illness like cancer from prayer. Action must be taken by scientists to find a cure for it, praying won't do anything. On the other hand, it may lessen the pain by making the person feel better despite being unable to cure the suffering. Furthermore, I do however, believe that prayer may be able to relieve mental suffering to an extent. Physical suffering, though, cannot be cured by prayer. The only way to attempt to alleviate any suffering is by facing the problem head on and to put effort into dealing with whatever is causing the suffering. By Arrthik Karunaharan ...read more.