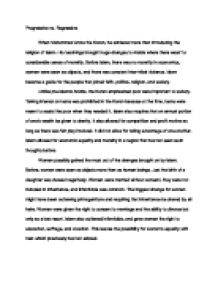 Progressive vs. Regressive Trends in Islam

Progressive vs. Regressive When Muhammad wrote the Koran, he achieved more than introducing the religion of Islam. His teachings brought huge changes to Arabia where there wasn't a considerable sense of morality. Before Islam, there was no morality in economics, women were seen as objects, and there was constant inter-tribal violence. Islam became a guide for the people that joined faith, politics, religion, and society. Unlike pre-Islamic Arabia, the Koran emphasized poor were important to society. Taking interest on loans was prohibited in the Koran because at the time, loans were meant to assist the poor when they needed it. Islam also requires that an annual portion of one's wealth be given to charity. It also allowed for competition and profit motive as long as there was fair play involved. It did not allow for taking advantage of one another. Islam allowed for economic equality and morality in a region that had not seen such thoughts before. Women possibly gained the most out of the changes brought on by Islam. Before, women were seen as objects more than as human beings. ...read more.

Islamic countries are still governed by Sharia Law, which cause them to move backward as opposed to progress. Women in the Islamic world are treated differently than in other modern societies. Some would argue that it's more progressive thinking because it holds women up as more than objects, which the rest of the world doesn't do to that extent. Otherwise, it's more regressive behavior because it does not allow women certain freedoms, which is looked down upon today. Women are made to cover their entire bodies and are punished if they do otherwise. "the new regime passed special legislation in 1982 making the new form of hijab mandatory for all females aged above six, regardless of religious faith. Violating the hijab code is punishable by 100 lashes of the cane and six months imprisonment" (Taheri). Women also can't pray in mosques unless there is a section specifically for them. They can't be alone with a non-related man and they are not allowed to travel alone without the approval of a male. Women are now allowed to vote but recent controversy has risen over the Saudi law that prohibits women from driving. ...read more.

The answer is very simple: Because you attacked us and continue to attack us" (guardian.co.uk). He goes on to explain how US occupies their lands with military bases and control of their governments and how they are being taken advantage of and stolen from. Under the Koran, this is justification for an equal attack on America. While they muslim world is generally aggressive towards the United States, wouldn't we or anyone else be the same way? If a foreign country came in and placed a military and economic presence that hurt us, wouldn't the citizens of any country try to retaliate? While it may be somewhat regressive to get revenge, they reacted no differently than any other country would have. Islam as a whole is a fairly regressive religion today. They are very restrictive with everyday actions of everyone but especially with women. If someone steps outside of Sharia Law, the punishments are severe are commonly physical and extremely painful. Islamic extremists lash out at western culture but do so in response to a domination of their culture as would anyone else. Islamic culture has few progressive aspects but is mostly regressive to today's society. ...read more.