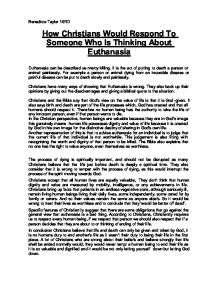 How Christians Would Respond To Someone Who Is Thinking About Euthanasia Euthanasia can be described as mercy killing. It is the act of putting to death a person or animal painlessly. For example a person or animal dying from an incurable disease or painful disease can be put to death slowly and painlessly. Christians have many ways of showing that Euthanasia is wrong. They also back up their opinions by giving out the disadvantages and giving a biblical quote to the situation. Christians and the Bible say that God's view on the value of life is that it is God-given. It also says birth and death are part of the life processes which, God has created and that all humans should respect it. ...read more.

Another representation of this is that to advise euthanasia for an individual is to judge that the current life of that individual is not worthwhile. This judgement is also fitting with recognising the worth and dignity of that person to be killed. The Bible also explains that no one has the right to value anyone, even themselves as worthless. The process of dying is spiritually important, and should not be disrupted as many Christians believe that the life just before death is deeply a spiritual time. They also consider that it is wrong to temper with the process of dying, as this would interrupt the process of the spirit moving towards God. ...read more.

According to Christians, Christianity requires us to respect every human being, if we respect that person we should also respect that if a person decides that they are about to or thinking of ending of their life. In conclusion Christians believe that life and death can only be given and taken by God, it is no humans duty to end another's life as it wasn't their duty to being their life in the first place. A lot of Christians who are strong about their beliefs and believe strongly that life shall be ended normally would, they would never tempt a human being to end their life as it is so valuable and dignified and it would be not only letting yourself down but letting God down. Benedicta Taylor 10RD ...read more.