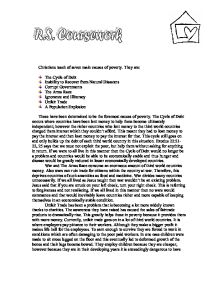 Christians teach of seven main causes of poverty. They are: * The Cycle of Debt * Inability to Recover from Natural Disasters * Corrupt Governments * The Arms Race * Ignorance and Illiteracy * Unfair Trade * A Population Explosion These have been determined to be the foremost causes of poverty. The Cycle of Debt occurs where countries have been lent money to help them become ultimately independent; however the richer countries who lent money to the third world countries charged them interest which they couldn't afford. This meant they had to loan money to pay the interest and then loan money to pay the interest for that. This cycle still goes on and only builds up the debt of each third world country in this situation. Exodus 22:21-22, 25 says that we must not exploit the poor, but help them without asking for anything in return. If we were to all live in this manner then the Cycle of Debt would no longer be a problem and countries would be able to be economically stable and thus hunger and disease would be greatly reduced in lesser economically developed countries. War and The Arms Race consume an enormous amount of third world countries money. ...read more.

In Matthew 25:31-46, it says: "I was hungry and you fed me, thirsty and you gave me a drink, stranger and you received me in your homes, naked and you clothed me." We must help our brothers as much as possible because it is our Christian duty and we are told: "I tell you the truth, whatever you did for one of the least of these brothers of mine, you did for me". When we look out for the very poorest people, we are looking out for God. CAFOD is the Catholic Agency For Overseas Development. It was created at an annual meeting for bishops. It is an organisation dedicated to providing aid for poverty stricken countries. They provide short term aid which is amenities such as food and drink to help people survive after natural disasters and other situations which leave people in a critical state. Not only do they do that though, but there motto is, "Give a man a fish, feed him for a day; teach a man to live, feed him for a lifetime" This is referring to long term aid. After they have exported the short term aid, they then provide them with long term aid such as projects to provide a sustainable source of food/drink/education etc. ...read more.

Also many feel we should help people categorically for instance Muslims should provide for the poorest Muslims and Christians should provide for the poorest of the Christians. However others may agree with this statement saying as a Christian it is our duty to treat everyone as we would like to be treated. Also as Christians are told to live as Jesus did and he traveled looking after the very lowest and most needy people he found. Many Bible teachings also tell us to do as much as we can for the poor and ask for nothing in return. As all our teachings come from the Bible a lot of people say we should follow this example. In my opinion we should look out for people all around the world, regardless of religion. Jesus did this and as Christians we should make our best effort to live as he did. Aid money greatly helps the people in Third World countries, and allows them to live through times of crisis by providing them with food and shelter. Christianity states that you must love and help your neighbour. Not helping when you have the chance to would go against this, and that would go against Christian teachings and belief. ...read more.