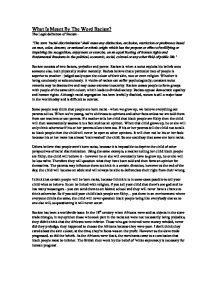 Racism in Society in the Past and Today. How do Christians view racism?

What Is Meant By The Word Racism? The Legal definition of Racism - "The term "racial discrimination" shall mean any distinction, exclusion, restriction or preference based on race, color, descent, or national or ethnic origin which has the purpose or effect of nullifying or impairing the recognition, enjoyment or exercise, on an equal footing, of human rights and fundamental freedoms in the political, economic, social, cultural or any other field of public life." Racism consists of two factors, prejudice and power. Racism is when a racist exploits his beliefs onto someone else, both physically and/or mentally. Racists believe that a particular race of people is superior to another - judged souly upon the colour of their skin, race or even religion. Whether it being conciously or subconciously. A victim of racism can suffer psychologically; constant racist remarks may be destructive and may cause extreme insecurity. Racism causes people to form groups with people of the same skin colour, which leads to divided society. Racists oppose democratic equality and human rights. Although racial segregation has been lawfully disabled, racism is still a major issue in the world today and is difficult to combat. Some people may think that people are born racist - when we grow up, we believe everything our parents tell us. When we're young, we're oblivious to opinions and other facts unless we are told them from our teachers or our parents. If a mother tells her child that black people are filthy then the child will then automatically assume it is a fact and not an opinion. When that child grows up, he or she will only think otherwise if his or her parents allow them too. If his or her parents tell the child not to talk to black people then the child will never be open to other opinions. It will then not be his or her fault because his or her mum has almost 'brainwashed' the child. ...read more.

The Methodist church opposes racial division and relish the thought of a multi cultured society. The Evangelical Lutheran Church - "Racism is a sin, a violation of God's intention for humanity." The Evangelical Lutheran Church show blatant resistance towards any racial thought or act by stating it would be a sin against God. The Church also believes in equality. The Church does not believe that some are superior to others. Vatican II: 'The Church condemns as unacceptable in the eyes of Christ any discrimination against people or any harassment on the basis of their race, colour, condition in life or religion.' Christianity also does not teach that Christians or any other religious group are superior to those of another faith, In my opinion Christians are equal to members of any other religion or those without religion. St Paul said that if you were a follower of Jesus, difference in race, origin, background, gender and colour would not count for anything. St Paul did not mention any opinions on the importance of these factors if someone was of a different religion. Christianity as a whole prohibits any form of racism; it teaches that Christians should not treat anyone as inferior because of their origin or colour of skin for the Church believes that we are all brothers and sisters in Christ. Explain how Christians put their beliefs about racism into practice. All branches of Christianity teach that everyone should be treated equally, racial differences should not change our attitude to others - James 2: 1-9 Christians must not show any favouritism or treat some people better than others. Opinions on someone shouldn't be made based on experiences between another person of the same race, as each and every one of us are unique - Jeremiah 1:5 OT 'before you were born I set you apart.' In the New Testament Jesus teaches us to be peaceful and take on a peaceful approach towards others, Violence will have concequences, i.e. ...read more.

Jesus used violence during the cleansing of the temple; he was outraged that things were being sold in his father's house; he 'overthrew the tables of the moneychangers, and the seats of them that sold doves.' - Matthew 21:12. Many Christians believe that Jesus was completely against violence in any shape or form, Jesus set his people an example of what was right and wrong, using violence would be going against his teachings 'Blessed are the peacemakers...' - 8 Beatitudes . Jesus preached that we should love God and our neighbour, love should always be strong enough to conquer any other emotion, including anger and frustration which would lead to violence. Jesus said 'You shall not kill, but I say to you anyone who is angry with his brother is liable to judgement' - Jesus meant that those who did kill would be sent to hell. For this reason, Quakers, or the religious Society of Friends, are pacifists. They consider all war and all violence is wrong and they work to spread their message of non violence. The Old Testament is for violence, and the New Testament is against violence. In both Old and New Testaments it teaches Christians not to be racist. I believe that violence is both an inappropriate and appropriate response to racism. I think that it is dependant on the situation. If it were to be a situation with a lot of importance, a situation that would change the future, then violence would be inappropriate. If it would stop someone from discriminating against you because of your differences, then I think violence may be the most effective response. I do agree that one who does not retaliate is not the weaker one, on the surface he may be deemed as weak, however if one looks deeper, the conscience of his mind is definitely stronger. Racism Coursework Cahina Nurina Khalil GCSE ...read more.