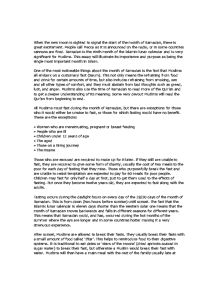 When the new moon is sighted to signal the start of the month of Ramadan, there is great excitement. People call Mecca as it is announced on the radio, or in some countries cannons are fired. Ramadan is the ninth month of the Islamic lunar calendar and is very significant for Muslims. This essay will illustrate its importance and purpose as being the single most important month in Islam. One of the most noticeable things about the month of Ramadan is the fact that Muslims all embark on a customary fast (Saum). This not only means the refraining from food and drink for certain amounts of time, but also includes refraining from smoking, s*x and all other types of comfort, and they must abstain from bad thoughts such as greed, l**t, and anger. Muslims also use the time of Ramadan to read more of the Qur'an and to get a deeper understanding of its meaning. Some very devout Muslims will read the Qur'an from beginning to end. All Muslims must fast during the month of Ramadan, but there are exceptions for those who it would either be unwise to fast, or those for which fasting would have no benefit. These are the exceptions: � Women who are menstruating, pregnant or breast feeding � People who are ill � Children under 12 years of age � The aged � Those on a tiring journey � The insane Those who are excused are required to make up for it later. ...read more.

Before Id begins, Muslims observe the Third Pillar of Islam, Zakah. Zakah is the giving of a fixed percentage of their spare income, to those in need. People gather in the streets to watch the rising of the new moon which signals the beginning of the festival. People then crowd into Mosques to hear a sermon given by the 'imam' (leader) particularly illustrating their responsibility towards the poor. After the service, families gather at home to enjoy food together, and to exchange gifts. Then families travel to the cemeteries in order to remember those who have been separated from them. amadan and Saum are very important for Muslims for many reasons. The main reason that Ramadan is so important is because Ramadan was the month in which Muhammad (pbuh) got his first revelation of the Qur'an on the Night of Power (Lailat-al-Qadr). Muslims use this as a time to commemorate the revelation by Saum mainly as it is required as the Fourth Pillar of Islam: 'O ye who believe! Fasting is prescribed for you, even as it was prescribed for those before you, that you may ward off [evil]' (Qur'an 2:183) Saum is a way for a Muslim to show their devotion and dedication to Allah, as it is actually a very challenging task to fast for 30 days and would take a very devoted and dedicated person to do so. Fasting also shows a Muslims determination, and builds discipline in a Muslim and most importantly, shows their self-control. ...read more.

Fasting builds appreciation in Muslims for the things they have everyday in life, and which are taken away from them by fasting. Fasting also builds self-control and endurance so that if ever Allah decided that their lives would change for the worst, they would be stronger and able to cope with the change. I also agree with a Muslim's point of view, but I must understand why someone would agree with the statement instead. I understand that someone may think that fasting is pointless because Muslims put themselves through unnecessary pain whilst doing so, but a person with this point of view is misinformed as if you look at the advantages listed above, that small amount of pain brings so much to a Muslim that it is well worth that small discomfort just for 30 days. Another argument that I have thought of that would agree with the statement is that if you are already poor, there isn't much more to gain from fasting in terms of character building etc. This point of view is partly true because if you're already poor, you cannot achieve a greater understanding of how a poor person feels, because you're poor anyway! Also, you cannot appreciate what Allah has given you, because Allah has chosen not to give you great luxuries. But if everyone has to fast, these aren't disadvantages, because the richer people acquire understanding of how you as a poor person feel, and are therefore more concerned, aware, and generous towards you in the long run, and that is a great advantage. ...read more.