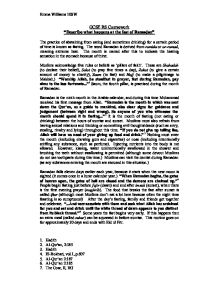 GCSE RS Coursework "Describe what happens at the fast of Ramadan" The practice of abstaining from eating (and sometimes drinking) for a certain period of time is known as fasting. The word Ramadan is derived from ramida or ar-ramad, meaning extreme heat. The month is named after this to indicate the heating sensation in the stomach because of thirst. Muslims acknowledge five rules or beliefs as 'pillars of faith'. These are Shahadah (to declare their belief), Salat (to pray five times a day), Zakat (to give a certain amount of money to charity), Saum (to fast) and Hajj (to make a pilgrimage to Makkah.) "Worship Allah, be steadfast in prayer, fast during Ramadan, pay alms to the less fortunate..."1 Saum, the fourth pillar, is practised during the month of Ramadan. Ramadan is the ninth month in the Arabic calendar, and during this time Muhammad received his first message from Allah. "Ramadan is the month in which was sent down the Qur'an, as a guide to mankind, also clear signs for guidance and judgement (between right and wrong). ...read more.

"When Ramadan begins, the gates of heaven open, the gates of hell are closed and the demons are chained up."4 People begin fasting just before fajir (dawn) and end after imsak (sunset), when there is the first evening prayer (maghrib). The food that breaks the fast after sunset is called iftar (although most Muslims don't eat a lot here because often the night time feasting is so sumptuous!) After the day's fasting, family and friends get together and celebrate. "...And now associate with them and seek what Allah has ordained for you and eat and drink until the white thread of dawn appears to you distinct from its black thread."5 Some years the fast begins very early. If this happens then an extra meal (called suhur) can be squeezed in before sunrise. This routine goes on for approximately 30 days and ends with Eid ul Fitr. Although most Muslims fast, some are exempt. Those excused include the aged (who are too weak), children under twelve (who are also too weak, and who might not understand), pregnant women (they need ...read more.

These include saying extra prayers and reading the whole of the Qur'an. All Muslims must be careful not to argue with other people, but to try to be particularly considerate and obliging. Ramadan is seen as a time for forgiveness. Muslims are encouraged to pay Zakat (alms) and perform Hajj (pilgrimage) during Ramadan. While Zakat is a pillar of faith, additional charity is given (in the form of food.) Some go to a mosque during the night to say Salat al-Tawarih (the Prayer of Relaxation/Rest.) No one knows for sure exactly when in Ramadan the Night of Power is, but on a designated night, lots of Muslims say certain prayers and read from the Qur'an. Although fasting is a difficult experience to go through, there is much celebration when it begins and after each day's fasting. Muslims endure it not only because Saum is a pillar of faith, but also because they gain spiritual strength, sympathy for the underprivileged (through experiencing their hardships), and they develop self-control. "O ye who believe! Fasting is prescribed to you as it was prescribed to those before you, that ye may (learn) self-restraint. ...read more.