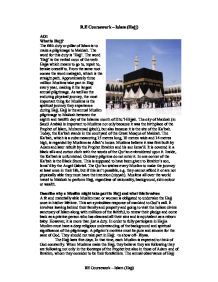 R.E Coursework - Islam (Hajj) AO1 What is Hajj? The fifth duty or pillar of Islam is to make a pilgrimage to Makkah. The word for this duty is 'Hajj'. The word 'Hajj' is the verbal noun of the verb Hajja which means to go to, repair to, betake oneself to. From the same root comes the word mahajjah, which is the straight path. Approximately three million Muslims take part in Hajj every year, making it the largest annual pilgrimage. As well as the enduring physical journey, the most important thing for Muslims is the spiritual journey they experience during Hajj. Hajj is the annual Muslim pilgrimage to Makkah between the eighth and twelfth day of the Islamic month of Dhu'l-Hijjah. The city of Makkah (in Saudi Arabia) is important to Muslims not only because it was the birthplace of the Prophet of Islam, Muhammad (pbuh), but also because it is the site of the Ka'bah. Today, the Ka'bah stands in the courtyard of the Great Mosque of Makkah. The Ka'bah, which is a cube measuring 15 metres long, 10 metres wide and 14 metres high, is regarded by Muslims as Allah's house. ...read more.

This is a symbol of how they are willing to give up their lives and possessions for God. Pilgrims eat some of the meat, but much of it is given to the poor. The pilgrims will also shave their heads or cut their hair. Then they take off their ihrams and put on their normal clothes. In the following days, the other two pillars are stoned in the same way. Afterwards, they return to Makkah where they circle the Ka'bah once more. Then their pilgrimage is over. AO2 Explain the meaning and significance of the events of Hajj for a Muslim The male pilgrims' garb of two unsewn white cloths must be worn upon entering the sacralised state of pilgrimage and it symbolises the weakness, dependence and equality of people. The Ka'bah symbolises God's House and his nearness. The Black Stone embedded in one of the four corner of the Ka'bah symbolises God's right hand, the kissing of the Black Stone symbolises one's faith to Allah. The sevenfold anti-clockwise circling of the Ka'bah represents the orbiting of human hearts towards their spiritual centre. Drinking the delicious spring water from the well of ZamZam gives a foretaste of the pure waters of Jannah. ...read more.

Furthermore, if there were no physical side to the Hajj experience, then how would it be possible for a pilgrim to remember? As the physical attributes of the journey leaves reminders upon the pilgrim's body, such as scars, bruises and aching muscles etc. Some people say that the physical part of the events also helps to make a pilgrim realise the pain, suffering and effort that other Muslims before had to face. To conclude I have shown both arguments as for why a true pilgrimage is really a journey within and also why a true pilgrimage is not a journey within. In my opinion I think that it IS a journey within oneself because anybody can go to Saudi Arabia to perform pilgrimage, but the real pilgrim is the person who intends and makes niyyah to go to Makkah. A true pilgrim is a person who has independently decided that this is the best choice and a true pilgrim is someone who will ask Allah for forgiveness for their past sins and once they have arrived home, they will be a new person and not make the same mistakes. ?? ?? ?? ?? RE Coursework - Islam (Hajj) ...read more.