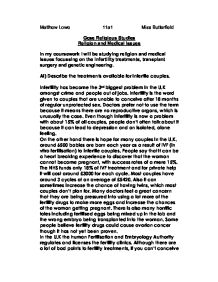 Matthew Lowe 11a1 Miss Butterfield Gcse Religious Studies Religion and Medical Issues In my coursework I will be studying religion and medical issues focussing on the infertility treatments, transplant surgery and genetic engineering. Ai) Describe the treatments available for infertile couples. Infertility has become the 3rd biggest problem in the U.K amongst crime and people out of jobs. Infertility is the word given to couples that are unable to conceive after 18 months of regular unprotected sex. Doctors prefer not to use the term because it means there are no reproductive organs, which is unusually the case. Even though infertility is now a problem with about 15% of all couples, people don't often talk about it because it can lead to depression and an isolated, alone feeling. On the other hand there is hope for many couples in the U.K. around 6500 babies are born each year as a result of IVF (in vitro fertilisation) to infertile couples. People say that it can be a heart breaking experience to discover that the woman cannot become pregnant, with success rates of a mere 15%. The NHS funds only 18% of IVF treatment and for private help it will cost around �3000 for each cycle. Most couples have around 3 cycles at an average of �5420. Also it can sometimes increase the chance of having twins, which most couples don't plan for. ...read more.

However Islamic lawyers have banned all other kinds of embryo technology. This is because abortion is banned and the other types are quite similar to it, in the way that it stops the child knowing its true parents. In the Muslim view the sperm and egg have to be from the couple themselves, so there are no problems with identity. Muslims have a strict view to the notion of lineage-children must know their parents. This is why Muslims do not allow adoption (it is banned). Muslims can use treatments that do not commit the sin adultery, which means no donor's products can be used. They to share the Christian belief that the embryos have not developed into the foetus and there elimination could be justified. On the other hand Islamic lawyers have banned all other types of embryo technology, unlike Christians. Other Christian Churches allow IVF and AIH. This is because if technology is used to ensure that couples can embrace the joy of having children then it is acceptable. The sperm and egg are still from the husband and wife, so the children will grow up with their parents. Also the discarded embryos are not foetuses and the elimination of them could be justified. Even though the other treatments aren't banned, the churches still have an enormous concern about them. Meaning that all couples without children are encouraged to adopt. ...read more.

Surely if genetic engineering can save lives, it's good to help those people, and families of those people who have diseases such as sickle cell anaemia and cystic fibrosis. This side can be seen through the story of Charlie Whittaker in the documentary 'Save our son', his parents Jason and Michelle explain how 4 year old Charlie suffers from DBA (diamond black anaemia) a rare form of anaemia which means medication every night and blood transfusions every three weeks, his parents want him to have a normal life without the threat of disease and life expectancy hanging over him. They wanted to have another baby and make sure through genetic engineering to ensure the new baby would be a match for Charlie - This would mean stem cells from the umbilical cord could be taken and transplanted into Charlie's bone marrow and hopefully cure his DBA. The HFEA refused to give permission for this procedure to go ahead in the UK, so the Whittaker's went to Chicago, their argument was that they was not designing a perfect baby they were helping their son at the same time as extending their family. Michelle gave birth to another son Jamie and Charlie's transplant went ahead and all signs point to it being a success - In my opinion this shows us how interfering with somebody's genes can lead to an amazing outcome. However, I do agree that it's not natural to create your own designer baby! I feel God made us all unique, and we shouldn't interfere with life as he planned. ...read more.