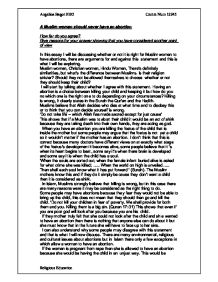 Re- Muslim women should not have abortions, how far do you agree with this statement

A Muslim woman should never have an abortion How far do you agree? Give reasons for your answer showing that you have considered another point of view In this essay I will be discussing whether or not it is right for Muslim women to have abortions, there are arguments for and against this statement and this is what I will be exploring. Muslim women, Christian women, Hindu Women, There's definitely similarities, but what's the difference between Muslims. Is their religion stricter? Should they not be allowed themselves to choose whether or not they should keep their child? I will start by talking about whether I agree with this statement. Having an abortion is a choice between killing your child and keeping it but how do you no which one is the right one to do depending on your circumstances? Killing is wrong, It clearly states in the Surah the Qur'an and the Hadith. Muslims believe that Allah decides who dies at what time and to disobey this or to think that you can decide yourself is wrong. ...read more.

When the world on high is unveiled..... Then shall each soul know what it has put forward' (Surah). The Muslim mothers know this and if they do it simply because they don't want a child then it is considered as shirk. In Islam, Muslims strongly believe that killing is wrong, but in this case there are many reasons were it may be considered as the right thing to do. Some people may have abortions because they fear they would not be able to bring up the child, this does not mean that they should then go and kill the child. 'Do not kill your children in fear of poverty. We shall provide for both them and you. Killing them is a big sin. (Quran 17:31) This shows that even if you are poor god will look after you because you are his child. If they mother truly felt that she could not look after the child and she wanted to have an abortion then there is nothing that anyone else can do about it but she must know that in the future she will have to face up to her sins. ...read more.

of its surroundings, this would no longer be killing an unborn un developed child but would be killing something with a soul, therefore killing a part of Allah. Abortion can become a big issue in the Muslim community as there are many reasons to keep the child and many reasons not to. I agree that Muslim women should not have abortions as there are many religious issues that are involved and if they are a strict Muslim it would be hard for them to go against these teachings but I also think that if the foetus has been conceived in an unjust way then they should be allowed to abort it and if having the baby is causing more pain to the mother than is necessary it should also be allowed to be aborted. I do not think that by any other reasons should the child be aborted as you are killing your child for reasons that are not enough, not enough to kill someone, not enough to act as god. Angelica Bagot 0192 Centre Num 13345 Religious Education ...read more.