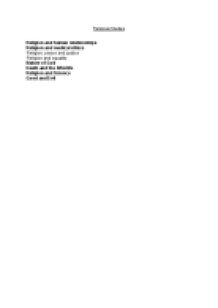 Religion and human relationships Religion and medical ethics - views of Christians and Moslems.

﻿Religious Studies Religion and human relationships Religion and medical ethics Religion, peace and justice Religion and equality Nature of God Death and the Afterlife Religion and Science Good and Evil ________________ Religion and human relationships (Christianity) A family is: 1. A husbands and wife with their children 2. The group that someone grows up in. 3. Basic social unit. 4. Biologically related group. 5. The group in which most humans spend a lot of time 6. Base for care for its dependants. There are two types of family ? the nuclear family and the extended family. The nuclear family is the on most often shown in media today. This is where a husband and wife live alone with their children, without any close relatives living in their household. In the extended family, there are several generations of the family living together. This is not so prevalent in Britain but is still common in other countries and societies. Every family is different but most do the same things. They provide certain economic rights and responsibilities; teaches us an acceptable way to behave, and the customs and traditions of our society; family also allows wealth and property to be passed on to a new generation. Christianity believes that there is a need for mutual respect and tolerance in the family and that there are 3 main elements necessary and essential for bringing up a family: love, freedom and discipline. Family is still the foundation of society. Families and their homes are still the platform for life, as we know it. Family defines individuals, who will in turn shape their world. However, I doubt that here, in Britain, family is as important as it used to be. Christianity teaches that children should be brought up in a family unit with both parents, a father and a mother. It is one of the purposes of Christian marriage, to form a family to bring the children up in a loving Christian environment. ...read more.

Nature of God Characteristics of God Some people see God as transcendent. They find it difficult to describe God as He is outside time and space. Others believe that he is immanent- He is with us all the time. People try and mould God into a human form- anthropomorphising. Eternal - lasting for all time without beginning or end Infinite - without any finite or measurable limits Invisible- not able to be seen Mystery- an unknown, secret, or hidden person or thing, beyond human understanding Benevolent-showing kindness or goodwill Omnipresent - continuously and simultaneously present throughout the whole of creation Sustains- to make something continue to exist Creator ? maker and originator Father, Son & Holy Spirit ? the Trinity Incarnate - having a bodily form, especially a human form Redeemer- saviour of humanity through his death on the Cross, saviour, liberator Judge Son of God Omnipotent- possessing complete, unlimited, or universal power and authority Omniscient ? all knowing. Why do Christians believe in God? Some Christians might not be able to explain why believe in God. They will reply it is a matter of faith. Others have been brought up to believe in God. Others may have had some experiences of God- He may have spoken to them. Some believers may have read or seen something which started their belief in God. Some children will be brought up with a belief in God, Their parents will lead by example and most people around them will believe in God. It will appear normal to them that God must be real. They may be confirmed, baptised go to Sunday School and celebrate Christian festivals. Some people have tried to prove that God exists. They have tried to set out a logical argument which shows beyond doubt that God exists. However, some people believe it is wrong to try and prove God exists. They say people should just accept his existence through faith. ...read more.

This rite may be celebrated at the grace. It is composed of Scripture, a prayer, intercessions and ends with more prayers. A sign of leave taking (often the sprinkling if holy water) concludes the rite. This time of final pray is important and gives people the chance to say a final goodbye to the bodily presence of their loved one. Describe Christian beliefs about what happens to evil people after death. [8] Candidates might describe different Christian views about life after death for evil people; they might include traditional views of hell as a place of suffering at the hands of the devil, or other views in which the good are united with God but the evil are left behind. Roman Catholic views about purgatory might be included. There could be a discussion of whether descriptions of hell as an eternal fire are symbolic or literal. Explain how a Christian funeral service might comfort someone whose close friend has died. [7] Understanding of the main elements of a Christian funeral service might be demonstrated, with the emphasis on the promise of resurrection and comforting images of the dead at rest and in the hands of God; death as something which takes a person forward into eternal life. This might be seen as comforting where death is not the end and the separation from loved ones is temporary. ?It cannot be true that there is life after death, because there is no evidence for it.? Do you agree? Give reasons to support your answer and show that you have thought about different points of view. You must refer to Christianity in your answer. [5] Answers might include the view that for Christians, there is evidence for life after death in the resurrection of Christ. Arguments might also include the idea that there are plenty of things which can be true in the absence of hard evidence; or that there is no evidence against life after death either. Contrasting views might agree with the statement and suggest that belief in life after death is wishful thinking. ...read more.