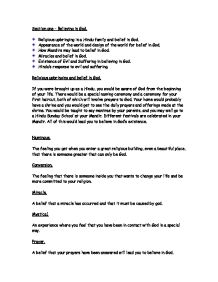 Section one - Believing in God. * Religious upbringing in a Hindu family and belief in God. * Appearance of the world and design of the world for belief in God. * How Mandirs may lead to belief in God. * Miracles and belief in God. * Existence of Evil and Suffering in believing in God. * Hindu's response to evil and suffering. Religious upbringing and belief in God. If you were brought up as a Hindu, you would be aware of God from the beginning of your life. There would be a special naming ceremony and a ceremony for your first haircut, both of which will involve prayers to God. Your home would probably have a shrine and you would get to see the daily prayers and offerings made at the shrine. You would be taught to say mantras by your parents, and you may well go to a Hindu Sunday School at your Mandir. Different festivals are celebrated in your Mandir. All of this would lead you to believe in God's existence. Numinous. The feeling you get when you enter a great religious building, even a beautiful place, that there is someone greater that can only be God. Conversion. The feeling that there is someone inside you that wants to change your life and be more committed to your religion. Miracle. A belief that a miracle has occurred and that it must be caused by god. Mystical. An experience where you feel that you have been in contact with God in a special way. Prayer. A belief that your prayers have been answered will lead you to believe in God. Miracles. Miracle is an event which seems to break a natural law and for which the only explanation is God. Some religious people think that a miracle is a natural event which must be caused by God, because of the time at which it occurs and religious connection it has. ...read more.

It is usually claimed that this is very different from giving them one dose of painkillers sufficient enough to kill them straight away. Hinduism and euthanasia Non-violence is the highest ethical code of behavior. It is induced as non-killing and non-harming. This simple summary of ahimsa is used by many Hindus to ban euthanasia in any forms. Many Hindus use the teaching of the Bhagwat Gita in support euthanasia. It is impossible to harm the soul, so easing the soul's process into next life; you can switch off the machine. Christians and euthanasia Christians agree with all other religions that only god has the right to take human life. Christians believe it is wrong to leave a person alive on a life support machine. Like all other religions Christians believe that prayers relieve a human from suffering. Euthanasia: The Law Active euthanasia is illegal in the UK. However, in the Netherlands, it is now legal for the doctor to give injections to patients who have a terminal illness, as long as they have freely given their consent. Society has been dedicated to making voluntary euthanasia legal since 1935. Life support machines, new technology, and the better drugs to fight cancer mean people are being kept alive longer. Arguments for euthanasia * People should have the right to do as they wish with their own lives. * Euthanasia removes the possibility of someone being a great burden to another, especially his or her own family. * We cut short the lives of animals when they are terminally ill, so why not for humans. Arguments against euthanasia * It would undermine the confidence of the patient to have in doctors to save lives. * The principle that human life is sacred must be maintained at all costs. * God gives life, and god alone should decide when it should end. Section three. * Cohabitation and marriage. ...read more.