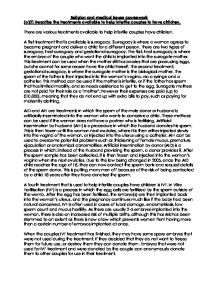 Religion and medical issues coursework (a)(i) Describe the treatments available to help infertile couples to have children. There are various treatments available to help infertile couples have children. A first treatment that is available is surrogacy. Surrogacy is where a woman agrees to become pregnant and deliver a child for a different person. There are two types of surrogacy, host surrogacy and gestational surrogacy. The first, host surrogacy, is where the embryo of the couple who want the child is implanted into the surrogate mother. This treatment can be used when the mother still has ovaries that are producing eggs, but she cannot for some reason have the child herself. The second treatment, gestational surrogacy, is where the surrogate mother is the biological mother. The sperm of the father is then injected into the woman's vagina, via a syringe and a catheter. This method can be used if the mother is infertile, or if the father has sperm that has limited mobility, and so needs assistance to get to the egg. Surrogate mothers are not paid for their role as a 'mother'; however their expenses are paid (up to �10,000), meaning that they do not end up with extra bills to pay, such as paying for maternity clothing. AID and AIH are treatments in which the sperm of the male donor or husband is artificially inseminated into the woman who wants to conceive a child. ...read more.

Muslims believe that transplanting from one human to another is against what Allah would want. Another reason why Muslims are against transplant surgery is because the Shari'ah teaches that nothing should be removed from the body after death, so organs should not be taken from Muslims who have died. This is because they believe that after death, they will go to heaven but in order to do this they need to have their body intact. Furthermore, they are also opposed to having a post mortem to determine the cause of death if it is needed, as they feel that their bodies may not be accepted into the next life if they are not left untouched. The Qur'an teaches that only God has the right to give and take life, and so transplanting organs is 'playing God' which is the greatest sin - shirk - in Islam. Also, Muslims believe in the sanctity of life, so life belongs to God. However, some Muslims say that transplants from a living donor (if the donor is a close relative) are acceptable. They agree as Muslim lawyers say it is OK, and the Muslim Law council of the United Kingdom say that Muslims can carry donor cards and have transplants. Also, Islam aims to do good in the world and help people, so this group of Muslims may argue that this is the reason why these people carry donor cards and have transplants. ?? ?? ?? ?? ...read more.