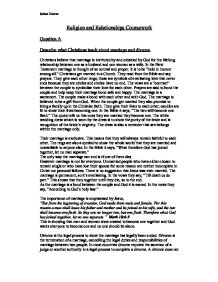 Religion and Relationships Coursework Question A Describe what Christians teach about marriage and divorce Christians believe that marriage is instituted by and ordained by God for the lifelong relationship between one as a husband and one woman as a wife. In the New Testament marriage is thought of as normal and proper. It is to be "held in honour among all." Christians get married in a Church. They read from the Bible and say prayers. They give each other rings; these are symbols of everlasting love that never ends because they are circles and circles have no end. The vows are a "contract" between the couple to symbolise their love for each other. Prayers are said to bond the couple and help keep their marriage bond safe and happy. The marriage is a sacrament. The couple make a bond with each other and with God. The marriage is believed to be a gift from God. When the couple get married they also promise to bring a family up in the Christian faith. They give their lives to each other; candles are lit to show their lives becoming one. In the Bible it says, "The two will become one flesh." The quote tells us that ones they are married they become one. The white wedding dress which is worn by the dress is to show the purity of the bride and is recognition of the bride's virginity. The dress is also a reminder that sex belongs within the marriage only. Their marriage is exclusive. This means that they will always remain faithful to each other. The rings are also a symbol to show the whole world that they are married and unavailable to anyone else. In the Bible it says, "What therefore God has joined together, let no man separate." The only way the marriage can end is if one of them dies. However marriage is not for everyone. ...read more.

The couple must also not become affiliated in relationships with other people. In their wedding vows they promise to forsake all others which means they that if they are tempted at any time to engage in a relationship with someone else or even be attracted to someone else they must resist this urge at all costs and ignore any further temptations. The vow that is said by the woman is, "forsaking all others, be faithful to him as long as you both shall live?" and by the man, "forsaking all others, be faithful to her as long as you both shall live?" The part of the vow that states, "be faithful to her/him as long as you both shall live," just emphasises the first part of the vow showing that the spouse must be faithful to the other until the other dies. If the marriage was to fail or was failing then the couple would have to decide if they were going to stay together, get an annulment or get a divorce. The couple may decide to stay together if they had children and didn't want to cause upset to them or have to fight out for custody in a court case. If the couple were to get divorced or get an annulment they would not be keeping to their vows, till death us do part." This vow states that the couple must stay together until one of them dies. Depending on which Christian denomination the couple come from it will differ on whether they get a divorce, but all Christian denominations agree on or hope that divorce never occurs within a relationship. Mormons believe that divorce is an institution that is supposed to continue into the afterlife, they believe they will enjoy the same family relations in the afterlife as they do in life. This is however a view which is disputed by all other denominations as it is not written in the Bible. ...read more.

Also, Jesus appeared to a woman first when he was resurrected (rose from the dead). The Bible teaches that men and women should forget their differences, "There is neither Jew nor Greek, slave nor free, male nor female, for you are all one in Christ Jesus." (Galatians 3:28) This quote shows that Jesus does not care about anyone's gender because he views all people as equal regardless of gender. Some Christians such as the Methodists, the United Reformed Church and the Church of England believe that women can be ordained as priests, vicars and ministers. They believe if a person is right for leading a church, then it should not matter whether they are male or female. They also believe that the church should set an example to the rest of the world by encouraging equality. Another reason they believe is that Jesus lived in an extremely different society to the one we have today, and it would be wrong to treat women in the way they used to be treated in the society Jesus live in. I both agree and disagree with the statement. I agree with it because men and women are obviously different, both physically and mentally. Most men are physically stronger and men are biologically different; women also have a slightly different mentality to men. If men and women were completely equal there would be no need to discuss the equality of men and women. In modern society Sociology and political correctness has a way of attempting to argue against basic facts; men and women are obviously different, some jobs will obviously favour men as they may require more strength and some jobs will obviously favour women. I also disagree with the statement because I think within society and social status men and women should be equal. I believe both men and women should be given equal opportunities, given equal pay in jobs and treated equally etc. Men and women should be equal within society but different roles will prefer men or women; men and women should respect each others abilities. ?? ?? ?? ?? Jabran Nawaz ...read more.