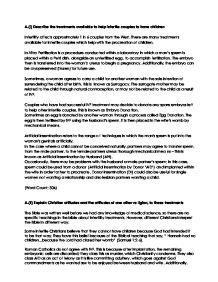 A.(i) Describe the treatments available to help infertile couples to have children Infertility affects approximately 1 in 6 couples from the West. There are many treatments available for infertile couples which help with the procreation of children. In-Vitro Fertilisation is a procedure conducted within a laboratory in which a man's sperm is placed within a Petri dish, alongside an unfertilized egg, to accomplish fertilization. The embryo then is transferred into the woman's uterus to begin a pregnancy. Additionally, the embryo can be cryopreserved (frozen) for future use. Sometimes, a woman agrees to carry a child for another woman with the sole intention of surrendering the child after birth, this is known as Surrogacy. The surrogate mother may be related to the child through natural contraception, or may not be related to the child as a result of IVF. Couples who have had successful IVF treatment may decide to donate any spare embryos left to help other infertile couples. This is known as Embryo Donation. Sometimes an egg is donated by another woman through a process called Egg Donation. The egg is then fertilised by IVF using the husband's sperm. ...read more.

Most Muslims totally oppose transplant surgery whatsoever as they believe that it goes against God's will. They believe this because the Shari'ah Law teaches that nothing should be removed from the body after death in order for the individual's soul to be at peace following resurrection. Mainly, many Muslims have a problem with transplant surgery because it gives the impression as if surgeons are acting as God, which is not permissible in Islam and serves as one of the greatest sins; this can be referred to as shirk. It also threatens the belief on the sanctity of life where only God has control over our fate. However, some Muslims do allow transplant surgery as long as the organ donor is a close relative. They believe this as the teaching in the Qur'an infer that we should all help one another; "Whoever saves the life of one person, it would be as if he saved the life of all mankind" (Surah 5:32). (Word Count: 305) (B) "Only God has the right to interfere with our genes" Many Christians may agree with this statement. They believe that from the moment of conception, God had a plan for all humans and that we should not undermine or rectify what he had intended for us. ...read more.

Based on this, I believe that we should use whatever means and measures necessary to lengthen our lives on earth. We don't necessarily need to make our earth perfect, but by aiding those in need by using genetic means, we are seeking rewards for heaven if it is existent, whilst also maintaining human dignity. I believe that upon creation, God has already interfered with our genes, making us who we are. But I believe that thereon after we should be reliant upon our own knowledge to get us through this life. If only God was allowed to interfere with genes, would it be fair to those whom were born with natural diseases - no it wouldn't be fair. I think God placed these poor and helpless people on earth in order to see how far we would go to help them whether we truly have faith in him. Overall, supporting the teaching in Islam and Christianity, scientists should interfere with genes in order to find cures for 'incurable' diseases for the future. We are after all the stewards of the earth...therefore; we need to make it a better place for the next generation to live in. ?? ?? ?? ?? ...read more.