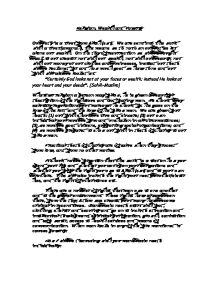 Religion, Wealth and Poverty Our body is a trust from Allah (swt). We are sent into this world with a trust (amanah), this means we do not own our bodies let alone our wealth. On the day of resurrection we will be bought back to our creator not with our wealth, not with our beauty, not with our money or our clothes and businesses, instead our deeds will be reckoned for and how much good we have done and our faith will also be looked at. "Certainly God looks not at your faces or wealth; instead He looks at your heart and your deeds". [Sahih-Muslim] Whatever religion a person may follow, he is given a beautiful description of the righteous and God-fearing men. He should obey salutary regulations, but moreover he should fix his gaze on the love of his lord and the love of his fellow men. We are given four heads: (1) our faith should be true and sincere; (2) our own individual soul must be firm and unshaken in all circumstances; (3) we must be good citizens, supporting social organisations; and (4) we must be prepared to show our faith in deeds of charity to our fellow-men. Practical deeds of charity are of value when they proceed from love, and from no other motive. It should not be forgotten that this world is a test on how you spend your life and whether you act upon your obligations and whether you fulfil the right you owe to Allah (swt) and to your own brothers. This will also include the right your needy brother/sister has, and the right of inheritance etc. There are a number of rights that men owe to one another and to the global environment. These rights have always been there, from the day, Adam was created, but many have become critical in recent times. Mans basic needs start with food, clothing, shelter and security and go on to include education and intellectual development, spiritual purification, growth, sanitation and safe water, access to health services and means of communication. ...read more.

The Prophet (saw) replied: "If you wish you can give its benefits to charity whilst preserving it such that it can no longer be sold, nor bought, nor may it be possible to give it away or bequeath it". Umar then made it a Waqf so that it may never be sold or gifted but in its return be given to the poor. This is the origin of Waqf in Islam. Aqeeqah is also a form of charity as when a baby is born its hair are shaven, weighed and the weight is converted into the present currency and then the money is given in charity. Allah (swt) says in the Quran, "Those who spend their wealth [in Allah's cause] by night and by day, in secret and in public, they shall have their reward with their Lord. On them shall be no fear, nor shall they grieve". [2:274] The word Zakat means 'sweetening' and it implies that those funds on which no Zakat has been paid are 'bitter'. The word Zakat also means purifying. Welfare tax is a compulsory levy on wealth. It is also paid at fixed rates on animals and crops, if their number/value has reached a certain minimum called the nisaab, this obligation is to be paid by Muslims, through an organised collection by the government or by voluntary organisations, or directly to those who are in need of help. Zakat is the third obligatory pillar of Islam. It is 2.5% of a Muslim's wealth when it exceeds the nisaab. Nisaab is, as mentioned before, the minimum amount of wealth that qualifies for Zakat. "Charity does not diminish wealth". [Muslim] Zakat is the regular and obligatory charity in an organised Muslim community, visually21/2 %, of merchandise and 10 %, on the fruits of the Earth. As against Zakat the term Sadaqah has a much wider connotation and is inclusive of Zakat aswell as in verse 90 surah 9. ...read more.

[7:31] If the rich Muslims are going to basically play with their wealth and have fun with wealth as long as wealth exists, then their wealth should rather be given to the poor as they will handle it with much more care and not spend it on unnecessary goods. There should be no rich Muslims in the world, but the rich should feel responsible for providing the needy with alms. Firstly, it is common sense to know that if inheritance of richness has been passed down through a family tree then it is impossible to have any poor Muslims. As is the same scenario for the poor. This is why to balance it out it is obligatory upon every Muslim (mature) to give welfare tax, using this methodology designed by Islam to every needy person on the face of this earth can receive sufficient Orphan Welfare, support and other general needs. According to a saying, if every person, upon whom welfare tax is obligatory, pays according to the duty there will be no more poverty on this earth. Therefore, if this act was to be obeyed by every participant the issue will be resolved. There is no reason why a Muslim should hinder in paying welfare tax for there are great rewards, which Allah has promised for the hereafter. In this way if the obligation of welfare tax was to be observed to its full then the world would be able to balance out allowing development from all corners of the world including for the poor. I personally say that there should be rich and poor Muslims in the world. I say this because when a rich sees a poor person spreading their hands it will make him feel guilty of the wealth he has and is not giving in charity from it, it will also make him turn to his lord and thank him of the wealth he has and for giving him a life of gratitude. For the Prophet (saw) has said: "The believers shade on the Day of Resurrection will be his charity". [Al-Hadith] ...read more.