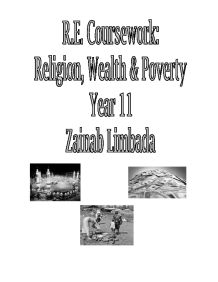 Both prosperity and poverty are from Allah. To limit spending will not bring prosperity nor over-expenditure cause poverty. It is an ethical obligation on mankind as a whole, not only Muslims, to care for and help each other i.e. for the wealthy to help the poverty-stricken amongst us. It is only right to help those in need as they are also human and have a right to live s humans. Islam is a practical religion concerned with the welfare of each and every individual. In fact, Islam is the only religion which has made charity compulsory. Wealth is a good asset if used in the correct manner but it can also be a very bad one if used in the wrong ways and so it is a test set by Allah. The prophet has said "Every nation has a trial and the trial of my nation is their wealth." Wealth is regarded as a vital essential of support for both the religious and worldly affairs. Allah says: "And give not unto the foolish your property which Allah has made a means of support for you."(Quraan 4:5) The spending of wealth is also an art as is the acquiring. Wealth is meant to be spent; and not for hoarding so that one may become a miser. There are many lawful ways of spending: to spend on one's family, to spend in jihad, to give to the poor and needy, to spend on orphans and widows, and to free slaves are all examples. ...read more.

The North-South divide is the socio-economic divide which separates the rich North or the developed world, from the poor south otherwise known as the developing or third world. The phrase 'rich north, poor south' is sometimes used. As countries become economically developed, they may become part of the "Rich North", regardless of their geographical location, while any other countries which do not qualify for "developed" status are considered to be part of the "Poor South". Every single human being, regardless of race, religion, or culture, has a right to live an average life and have the basic necessities of life, which are: clean drinking water, food, shelter, clothing, education, employment and medical care. The world is an unjust place and not everyone is fortunate enough to have these bare necessities. Education provides the key to a better future, helping people to fulfil their potential and pursue their goals in life. For millions of people across the developing world even basic education is simply out of reach. Poverty is closely linked to illiteracy-as both cause and consequence. Without basic literacy or skills the opportunities for people to break free from poverty are limited. "Are those equal, those who know and those who do not know?" (Qur'an 39:9) Living in unhygienic conditions with little food and no clean water, millions of people are prone to malnutrition and ill health. ...read more.

Here is the Islamic Relief's intervention in Banda Aceh (Indonesia) at a glance: * Distribution of 400 family sized tents among survivors * Loaning to the public to help re-establish businesses * Over 400 permanent homes under construction * Funding carpentry training for 42 people * Health clinics have been built and mobile health clinics are sent * Wells dug and pumps installed * 20 schools rebuilt * 174 lavatories built in 20 different locations * Tailors, fishing boats, rickshaws and other forms of aid have been supplied Islamic Relief works in two general areas: It collects money on the one hand and implements projects on the other. Islamic Relief therefore maintains two types of offices: fundraising offices and field offices. Islamic Relief has 14 field offices spread across different countries where they work, including Albania, Azerbaijan, Bangladesh, Bosnia, Chechnya, Egypt, India, Iraq, Kosovo, Mali, Pakistan, Palestine and Sudan. Through the generosity of the donor community over the past twenty years, Islamic Relief has earned a reputation for its capacity to help the poor and vulnerable. Islamic Relief is now a well known and respected aid agency committed to the world's poorest people. Websites www.islamic-relief.com www.g8.gov.uk www.en.wikipedia.org/poverty Books Faza'il-e-Sadaqaat - Parts 1 & 2 by Muhammad Zakariyya Kaandhlawi, Altaf & Sons. ?? ?? ?? ?? 6 ...read more.