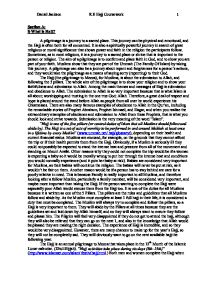 Section A: i) What is Hajj? A pilgrimage is a journey to a sacred place. This journey can be physical and emotional, and the Hajj is often both for all concerned. It is also a spiritually powerful journey in search of great religious or moral significance that shows power and faith in the religion the participants follow. Sometimes, as in most religions, it is a journey to a sacred place or shrine that is important to the person or religion. The aim of a pilgrimage is to confirm and place faith in God, and to show you are part of your faith. Muslims show that they are part of the Ummah (The Family Of Islam) by taking this journey. A pilgrimage can also be a journey about repent and forgiveness for a person's actions, and they would take the pilgrimage as a means of saying sorry (repenting) to their God. The Hajj (the pilgrimage to Mecca), for Muslims, is about the submission to Allah, and following the 5 pillars. The whole aim of the pilgrimage is to show your religion and to show your faithfulness and submission to Allah. Among the main themes and messages of Hajj is submission and obedience to Allah. The submission to Allah is so very important because that is what Islam is all about; worshipping and trusting in the one true God: Allah. Therefore, a great deal of respect and hope is placed around the stand before Allah as people from all over he world experience his Greatnesses. There are also many famous examples of obedience to Allah in the Qur'an, including the remarkable stories of Prophet Abraham, Prophet Ishmael, and Hagar, and when you realise the extraordinary examples of obedience and submission to Allah from these Prophets, that is what you should look and strive towards. Submission is the very meaning of the word "Islam". "Hajj is one of the five pillars (or central duties of Islam that all Muslims should follow and abide by). ...read more.

The 3 pillars are the aimed at targets. Section B: i) Explain the meaning and significance of events in Hajj for a Muslim There are many meanings and significances that Muslims experience from, and during, the Hajj. These experiences have many different effects on the Muslims, and they affect them both physically and mentally. The background story for each event in Section A is also important, as it will affect the meaning of the Hajj, and it will affect the Hajj-goer. There are 3 important background information sections that Muslims look towards when understanding about Hajj. They are the background information on Adam and Eve (The paradise and heaven), Ibrahim (The test, stoning of devil), and Muhammad's Teachings (All events in Hajj). There is also background information that Muslims have on the Ka'bah, the ZamZam Well, mount Arafat, Marwah, Muzdalifah, and Mina. The background on Adam and Eve is very important, as it creates the basis of the forgiveness of God, and the return to Paradise (heaven). It is written in the Qur'an that the story began on the Mount of Arafat (where Muslims make the stand before Allah). It is said that it was on this Mountain that Allah forgave Adam and Eve and their sins, and allowed them to return to Heaven with Him. The reason they were banished form Heaven in the 1st place was because they gave in to the Devils' temptations, and they were removed from heaven and moved away from each other. They were both terribly unhappy and saddened by this fact. Allah knew they would eventually turn back to Him when they had leant that they needed each other and God. They eventually did turn to God and in thanks for reuniting them they built a simple, yet religious, shrine near to the Mount, which is said to be the 1st constructed religious building that was place don the face of the Earth. ...read more.

Quotes and discuss e.g..... EXTENSION...SUFISM Explain their views Conclusion showing complexity. SUFISM::: The term Sufism, which has become over the ages very popularly used, and often with a wide range of meanings, originates from three Arabic letters sa, wa and fa. There have been many opinions on the reason for its origin from sa wa fa. According to some the word is derived from safa which means purity. According to another opinion it is derived from the Arabic verb safwe which means those who are selected. This meaning is quoted frequently in Sufi literature. Some think that the word is derived from the word saf which means line or row, implying those early Muslims who stood in the first row in prayer or supplication or holy war. Yet others believe that it is derived from suffa which was a low verandah made of clay and slightly elevated off the ground outside the Prophet Muhammad's mosque in Medina, where the poor and good-hearted people who followed him often sat. Some assume that the origin of the word Sufism is from suf which means wool, which implies that the people who were interested in inner knowledges cared less about about their outer appearances and often took to wearing one simple garment all the year round which was made of wool. Whatever its origin, the term Sufism has come to mean those who are interested in inner knowledge, those who are interested in finding a way or practice towards inner awakening and enlightenment. Resources Used: Books: 1. World Faiths: Islam, Hodder and Stoughton, TY, 1994, Pages 69-83 2. Beliefs, Values and Traditions, An Lovelace and Joy White, Heinemann, 1996, Page Numbers 91, 114, 122, 123, 136 3. Examining Religions, Ruqaiyyah Waris and Maqsood, Heinemann, 1995, Page Numbers 50, 66-75 Websites: 1. http://www.google.co.uk/search?hl=en&defl=en&q=define:Hajj&sa=X&oi=glossary_definition&ct=title 2. www.ummah.net/hajj/glossary/ 3. www.religioustolerance.org/gl_h.htm 4. faculty.juniata.edu/tuten/islamic/glossary.html 5. http://www.islamset.com/islam/festiv/hajj.html 6. http://www.yobserver.com/cgi-bin/2007/exec/view.cgi/22/11470 7. http://islam.about.com/od/hajj/f/ihram.htm 8. http://www.solcomhouse.com/islam.htm 9. http://www.studentcentral.co.uk/describe_explain_why_a_muslim_might_take_part_the_6563/ 10. http://www.talkislam.com/iquotes/index.php?nCatId=26 11. http://www.islamonline.net/English/hajj/2002/01/journey/article4.shtml 12. http://www.saudiembassy.net/Issues/Hajj/IssuesHaj.asp 13. http://en.wikipedia.org/wiki/Incidents_during_the_Hajj 14. http://www.beliefnet.com/story/207/story_20790_1.html 15. http://transcripts.cnn.com/TRANSCRIPTS/0501/19/i_ins.01.html 16. http://www.nuradeen.com/Reflections/ElementsOfSufism1.htm 17. ?? ?? ?? ?? 1 Daniel Jackson R.E Hajj Coursework ...read more.