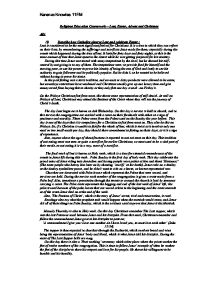 Religious Education Coursework ~ Lent, Easter, Advent and Christmas A01 (i) Describe how Catholics observe Lent and celebrate Easter : Lent is considered to be the most significant festival for Christians. It is a time in which they can reflect on their lives, by remembering the sufferings and sacrifices Jesus made for them; especially during the events which happened during the time of lent. It lasts for forty days and forty nights, as this is the same amount of time that Jesus spent in the desert while he was getting prepared for his ministry. During this time Jesus was teased with many temptations by the devil, but he showed his self-control by not giving in to any of them. The temptations were; to provide food for himself and the starving poor, to use his power to prove his identity of being the son of God and lastly to use his authority to gain followers and be politically popular. But he didn't, as he wanted to be believed without having to prove his status. In the past fasting was a strict tradition, and no meat or dairy products were allowed to be eaten, but nowadays restrictions have weakened and Christians usually give up one luxury item and give money saved from buying this to charity or they only fast one day a week -on Friday's. On the Fridays Christians fast from meat, this shows some representation of self-denial. As well on Fridays of Lent, Christians may attend the Stations of the Cross where they will see the journey of Christ's death. The day Lent begin on is known as Ash Wednesday. On this day a service is held in church, and in this service the congregation are marked with a cross on their foreheads with ashes as a sign of penitence and morality. These Palms come from the Palms used on the Sunday the year before. ...read more.

He did this each year for four years to save the daughters, and until the last time didn't let his identity known as he believed only God needed to know his good deed. The gift giving also celebrates the birth of Jesus, and is linked to when the three kings gave gifts to baby Jesus. Having a Christmas tree put up in homes is also a custom, and can be linked to the bible through the 'tree of paradise', which tempted Adam and Eve. It is also in a triangular shape which has three corners - like the Holy Trinity of the Father, the Son and the Holy Spirit. Also it is made out of Evergreens which are symbolic for being related to the immorality and strength of Jesus. Celebrations for Christmas day actually begin on Christmas Eve, with the midnight mass. This mass leads into Christmas day, and on Christmas day there are family services held. On Christmas day, children usually receive gifts and cards - supposedly from St. Nicolas, and families celebrate the day together. It is a day on which everyone usually has a holiday and reunites together as families and celebrates the gracious birth of Christ. Churches also celebrate the day and put up decorations such as the symbolic evergreen plants. The season of Christmas for Christians is generally a time in which they help others, especially those in need and the poor, but Christmas day is sometimes used as the day for which they go out and help the poor. They do this in various ways, and some provide food and clothing for the poor. A good example of Christians who do good for others on Christmas day is those who work in hospitals, as Christmas is all to do with the birth and celebration of a life - Jesus', so working in a hospital where curing and helping others is practiced is a good way of putting Christmas messages into practice. ...read more.

Many Christians would agree with this comment, as they believe that the central point belief of being a true Christian believes that Jesus rose from the dead, as this is the hardest belief to believe. They also argue that it is the most important event, as it shows the power Jesus had as the Messiah, as no one but him has ever resurrected. In 1 Corinthians it is stated that if Christians do not believe in the resurrection than all that is preached in the religion of Christianity means nothing, as the resurrection is what makes the religion special to follow, as the belief in it shows the belief in religion true. Continuing the argument for this point of view would be that, although without Christmas there would be no Resurrection, it is not as vital to the religion as Easter for this reason. But other Christians may argue that God came to us through Jesus at Christmas, and the time in which he is born on Earth is a joyous and significant event in Christianity, as it is when the journey of the Messiah begins. Without this event there would be no resurrection or any of the events that happened during Christ's life which made us believe he was the Messiah. Also the coming of the three kings to Jesus' birth is what signifies the importance of him to Christians. The (questionable) virgin birth can also be argued as being as miraculous as the resurrection, as this too shows the significance of Jesus. Although religiously Easter is supposed to be the most important, because of it being more sorrowful and mournful to the death of Jesus, Christmas is more focused on in modern culture as it is a pleasant occasion. More people get involved in Christmas than Easter - mainly because of things such as presents and cards, that are non-Christian activities, but they still know the story and meaning of Christmas more than Easter. ?? ?? ?? ?? Kerenza Knowles 11EM ...read more.