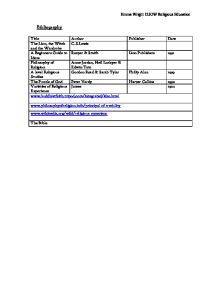 &quot;Religious experience is all in the mind of the believer&quot; -Examine and comment on this claim

Bibliography Title Author Publisher Date The Lion, the Witch and the Wardrobe C.S.Lewis A Beginners Guide to Ideas Raeper & Smith Lion Publishers 1991 Philosophy of Religion Anne Jordan, Neil Lockyer & Edwin Tate A level Religious Studies Gordon Read & Sarah Tyler Philip Alan 1999 The Puzzle of God Peter Vardy Harper Collins 1990 Varieties of Religious Experience James 1902 www.buddhistfaith.tripod.com/integrated/id10.html www.philosophyofreligion.info/principal of credulity www.wikipedia.org/wiki/religious_experienc The Bible "Religious experience is all in the mind of the believer" -Examine and comment on this claim In 'The Lion, the Witch and the Wardrobe' by C.S.Lewis, when Peter and Susan go to the professor to express their concern for Lucy, the professor replies with "There are only three possibilities. Either your sister is telling lies, or she is mad, or she is telling the truth." This statement illustrates Swinburnes 'Principal of Credulity' which states that 'if it seems to a subject that x is present, then probably x is present'. Hence if Lucy isn't mad, and she does not tell lies, then you would have to conclude that she is telling the truth. This is what Swinburne is saying when it comes to God and religious experience. Generally, says Swinburne, it is reasonable to believe that the world is probably as we experience it to be. Unless we have some specific reason to question a religious experience, then we ought to except that it is at least prima facie evidence for the existence of God. During the course of this study I intend to examine and critically evaluate this approach to religious experience and several others in order to address the question 'Religious experience is all in the mind of the believer'. I will hope to find whether or not religious experience is something that people actually undergo or whether it is in fact all in the mind. I feel that religious experience cannot just be dismissed, but is it a reason for the belief in God and can it be seen as valid? ...read more.

things suddenly became different... there was a tremendous awe, and the sense of the presence of God... people began to fall under the power of God... there was a lot of crying and a lot of heart-searching... God was obviously present.' In a crowd of like minded individuals, it is arguably easy to be swept along the tide of emotion and to feel compelled to be sharing the same experience as fellow worshipers. I agree with this statement, I feel that this might have occurred during the Toronto blessing and that the people did not really have a religious experience but rather was swept up in the crowd. This could have happened by the techniques of lighting, music and repetition of words having a physical and psychological effect on the people, this is the sort of thing that can be misinterpreted as a religious experience of the divine. The argument from religious experience is the argument from the experiences of God to the existence of God. In its strong form, this argument asserts that it is only possible to experience that which exists, and so that the phenomenon of religious experience demonstrates the existence of God, people experience God, therefore their must be a God; case closed. In its weaker form, the argument asserts only that a religious experience constitutes evidence for Gods existence. As I have articulated earlier this form of the argument has been defended by Richard Swinburne with an appeal to the principal of credulity. As well as Richard Swinburne's principal of credulity he also came up with his principal of testimony which claims that it is reasonable to accept that other people usually tell the truth. So, in the absence of special considerations, it is reasonable to believe the reports of those who claim to have religious experiences. To simplify we should believe a person unless we have good reason not to (i.e. ...read more.

Such an experience can be spontaneous or it may be brought about as a result of intensive training and self discipline. An example of this is the practises of the Sufi orders of Islam, or Buddhist mystical experience that has been explained earlier. To conclude I think that religious experience is all in the mind. This is because if I look back at Swinburne's principal of credulity it seems to me that he only takes a belief of God point of view into consideration and he rejects that some sort of atheist experience is evidence of no God i.e. it is very one sided. I think in some cases the person thinks that the experience is God when really it isn't; they only want it to be God because God is made out to be all powerful and all loving, and the person feels that their life would become better if they were a part of that. An example of this could be the conversion of Nicky Cruz (1938), a gangster turned Christian He said he had some sort of religious experience and because of it turned to God. Now this could be that he did actually have an experience of God, but what I believe is that he obviously had psychological problems from his childhood because he wasn't in a stable relationship with his parents and therefore when this priest went out of his way to help him without wanting anything in return, Nicky saw him as a father figure and realized he wanted to belong somewhere, this place being with God. Sigmund Freud (1858-1939) believed that religion is 'a universal obsessional neurosis' which is demonstrating on what I think on Nicky Cruz. Freud thought that religious experiences are the manifestation of psychological needs. And that religion is nothing more then an illusion created by people to enable them to cope with the haunting fear of death and alienation. From examining this question I have come to the conclusion that yes, religious experience is all in the mind. ?? ?? ?? ?? Emma Wright 12JOW Religious Education ...read more.