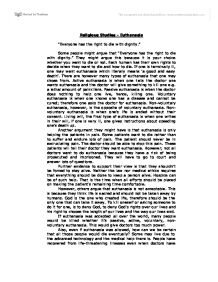 This would give doctors too much power. Also, even if euthanasia was allowed, how can we be certain that all those people would die eventually? Some may live due to the advanced technology and the medical help there is. People have recovered from life-threatening illnesses even when doctors have medically given up hope. Even, if they are certain, modern medicine could be given to them to keep pain levels down and allow a person to die with dignity. Under the Hippocratic Oath, doctors must preserve life, not wilfully destroy it. People may be pressurised into taking euthanasia when really they want to carry on with their lives. This may happen when the parents don't want to see their child suffering and tells the doctor for non-voluntary euthanasia. There is a law about euthanasia in some countries. So if doctors were to use euthanasia in these countries, they would be breaking the law, therefore making them vulnerable to the police. Other people have rights too. ...read more.

About the issue of euthanasia I believe that it is wrong. This is because, like the above points, God is the one who created life and should be the one to take it away. Some people may live because of the technology available and medical help. I, however, think that if euthanasia was allowed, that non-voluntary euthanasia would be definitely wrong because one is not choosing whether they want to die or not. The other different types of euthanasia would be fine because they have the patients consent. About the religious views, I think that I agree with it because I have thought euthanasia is wrong and all the religions I mentioned above have the same views as me. They all believe that God created life and should be the only one who can take it away. If anyone was to take someone's life away, they would be breaking God's power and therefore would be punished in a severe way. Therefore, about the statement "Everybody has the right to die with dignity" I conclude that this statement in my point of view is right. ...read more.