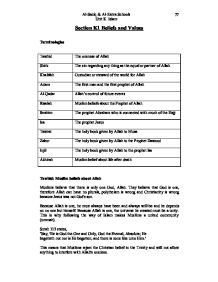 Section K1 Beliefs and Values Terminologies Tawhid The oneness of Allah Shirk The sin regarding any thing as the equal or partner of Allah Khalifah Custodian or steward of the world for Allah Adam The first man and the first prophet of Allah Al-Qadar Allah's control of future events Risalah Muslim beliefs about the Prophet of Allah Ibrahim The prophet Abraham who is connected with much of the Hajj Isa The prophet Jesus Tawrat The holy book given by Allah to Musa Zabur The holy book given by Allah to the Prophet Dawood Injil The holy book given by Allah to the prophet Isa Akhirah Muslim belief about life after death Tawhid: Muslim beliefs about Allah Muslims believe that there is only one God, Allah. They believe that God is one, therefore Allah can have no plurals, polytheism is wrong and Christianity is wrong because Jesus was not God's son. Because Allah is one, he must always have been and always will be and he depends on no one but himself. Because Allah is one, the universe he created must be a unity. This is why following the way of Islam makes Muslims a united community (ummah). Surah 112 states, "Say, 'He is God the One and Only, God the Eternal, Absolute; He begetteth not nor is He begotten; and there is none like unto Him.' This means that Muslims reject the Christian belief in the Trinity and will not allow anything to interfere with Allah's oneness. The belief in Allah's oneness is called tawhid by Muslims and is the basis of all their beliefs about Allah. It is also the first part of the shahadah (first pillar, often called the Muslim creed) - 'I bear witness that there is no god but Allah.' Muslims believe that as there is only one God, it follows that Allah created everything. According to Muslim belief, Allah created the universe and humans in six days, though many Muslims would claim that one-day for God is not the same as one day for humans and therefore this could fit with the timescale of evolution. ...read more.

Although Friday is the Muslim holy day, it is not a complete day. After the midday prayers Muslims should go back to work. There is only need for a couple of hours off work. The practice and significance of zakah Zakah is a special charity tax that Muslims have to pay. It is commanded in the Qur'an and there are many regulations about it. Once a year Muslims should pay zakah on their income and savings. The Law Schools say that Muslims should pay zakah of two and a half percent on their savings and on their income above the nisab (the amount you need to live on). Farmers have to pay proportions of their crops and livestock. The money should be paid to the mosque and all mosques have a special zakah box for collecting the money. Zakah should be used: *?to help the poor. Zakah should re-distribute wealth from rich to poor. *?to help orphans and widows. *?to pay for the upkeep of mosques and Muslim schools. *?to pay for Muslim missionary work. All Muslims should pay zakah: * as a purification. Zakah means purification and Muslims believe that giving zakah purifies what wealth a Muslim keeps so that it does not stop them from worshipping Allah properly. * because the Qur'an says Muslims must. * because of tawhid and ummah. God's unity means all wealth is God's, and sharing wealth means that a Muslim believes in the ummah and in unity. It is also a sign of belief in the unity and brotherhood of the ummah of Islam if a Muslim shares with less fortunate Muslims. * to show submission to the will of God. * because it is one of the pillars. Sadaqah is voluntary charity whereas zakah is the compulsory charity. All Muslims are expected to give more than the compulsory, but there are no rules on this. The Qur'an says that Muslims should give "What you can spare" and many Muslims believe that if the rich Muslims took zakah and sadaqah seriously there would be no poverty among Muslims because all would share. ...read more.

The central mosques are also ensuring that the Islamic laws of inheritance can be implemented within the framework of the British system, thus enabling the Muslims in the U .K. to retain their Islamic identity, remain loyal to their faith and to the Islamic law (Shariah). In Britain and all over the world during the blessed month of Ramadan there are usually more people at mosques, as they go there to break their fasts, offer the Maghrib, (after sunset), Isha (night) and Tarawih (special prayers in Ramadan) wherein the whole Qur'an is usually recited within a month. Community gatherings are usually held at the mosque particularly at the time of Eid festivals, twice a year, when there is a big celebration after the prayers. Such meetings are very important in Britain where in many places Muslims are still in the minority. These gatherings give a chance to the Muslim community to familiarise themselves with one another and bonds the tie of friendship on happy and sad occasions like birth, marriage, death and many others. Quite a few mosques have facilities for washing and shrouding the dead bodies and to keep the corpses there until the burial is arranged and the Janazah prayer is said. Mosque Organisations in Britain There are three main types of mosque organisation in Britain. 1. The Sect type: Such as the Barelwi, the Deobandi, the Jama'at, the Shiah, the Ahmajiyya. These organizations are different because they have different interpretation of Islam. 2. Ethically based Mosque Such as those bgased on Gujrati or Bengali speaking Muslim communities. Khutbas and lectures etc are given in the community's language. 3. General Mosque organisations Which are trying to create a more unified voice in Islam and enable British Muslims to negotiate with the government. Some of these are at local level such as Bradford Council of Mosques, others at national level such as- The Imam and the Mosques Council of Great Britain, the council of Mosques UK and Eire. ...read more.