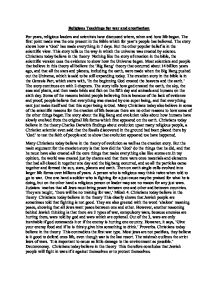 Religious Teachings for war and creationism

Religious Teachings for war and creationism For years, religious leaders and scientists have discussed where, when and how life began. The first point made was the one present in the Bible which for year's people has believed. The story shows how a 'God' has made everything in 7 days. But the other popular belief is in the scientific view. This story tells us the way in which the universe was created by science. Christians today believe in the theory Nothing like the story of creation in the bible, the scientific version uses the evidence to show how the Universe began. Most scientists and people that believe in this theory all believe the 'Big Bang' theory that occurred about 14 billion years ago, and that all the stars and planets, including the earth, were made when the Big Bang pushed out the Universe, which is said to be still expanding today. ...read more.

that there were once materials and elements that had all closed in together one day and the big bang occurred, and so all the particles came together and formed the sun, stars, planets and earth. Then on earth single cells evolved into larger life forms over billions of years. A person who is religious may think twice when told to go to war. One one hand a soldier who is fighting for a just cause may be praised for what he is doing, but on the other hand a religious person or leader may see no reason for any just wars. Judaism teaches that all Jews must bring peace between one and other and between countries. They are taught, 'there will be no training for war,' Mikah 4. Christians today believe in the theory Christians today believe in the theory This clearly shows that Jewish people are sometimes told that fighting is not good. ...read more.

Muhammad taught that treating people humanely is important, 'Hate your enemy mildly he may become your friend one day,' Hadit. However, in contrast to the peace theory that Islam follows, they also believe that fighting to defend Islam is important. Christians today believe in the theory 'Permission to take up arms is hereby given to those who are attacked, because they have been wronged.' Surah. This clearly shows that many Muslims are allowed to fight back because they have been attacked themselves. This is contradictory to the first point of peace, but because of the Islamic belief in Jihad, a struggle, they are allowed to fight. Jihad is something used for when one is in trouble or wants to resists temptation to sin. 'If there is an unjust attack the aggressor has to be fought until they submit to God's judgment. Jihad for the honour or preservation of their faith' Surah. This therefore concludes that many Muslims will fight in a war if it is against Islam. ?? ?? ?? ?? ...read more.