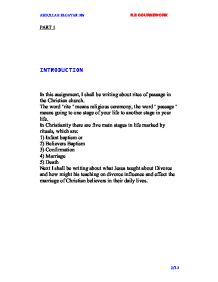 Rites of passage in the Christian church.

PART 1 INTRODUCTION In this assignment, I shall be writing about rites of passage in the Christian church. The word 'rite ' means religious ceremony, the word ' passage ' means going to one stage of your life to another stage in your life. In Christianity there are five main stages in life marked by rituals, which are: 1) Infant baptism or 2) Believers Baptism 3) Confirmation 4) Marriage 5) Death Next I shall be writing about what Jesus taught about Divorce and how might his teaching on divorce influence and effect the marriage of Christian believers in their daily lives. BAPTISM This event usually takes place before the child is one year old, but there is no limit. Christians believe that life is a gift from God, so it is important for the child to become a Christian as soon as possible. The ceremony takes place in the church. There is a font at the entrance of the church; this is the ritual take place as a symbol to represent the door to new life. The priest or vicar would perform the ritual. The child will be sprinkled three times with the holy water and blessed in the name of the father, son and the Holy Spirit. The parents promise to bring up the child as a Christian. Some Christian churches try to keep to the New Testament idea of baptism. They believe that adults should be baptized, because they are aware of what they are doing and the faith they are steeping into, so are committed. The person who wants to be baptized walks into baptismal pool, which is usually at the front of most Baptist churches. The person usually wears white clothes to show a sign of purity. They promise to follow the teaching of Jesus and to participate in the church. The person must be at least 12 years old and therefore able to make a testimony to say why they chose to believe in Jesus and why they wish to be a Christian. ...read more.

I tell you that anyone who divorces his wife, except for marital unfaithfulness, and marries another women commits adultery." In the Methodist church they believe that a couple can be divorced, if their marriage has no hope in being together, this means that the couple can get divorced for any suitable reason. Also the partners can be remarried in the Methodist church after being divorced. This Christian group which stress the work of the Holy Spirit in each individual. Believe if the marriage has no chance of caring on and the partners can't stand each other any longer. Then there is no point keeping the marriage if there is no spiritual link between them. Then they can be divorced and remarry. The Roman Catholic Church does bot approve of any couple being divorced. A couple can live separately, but can't get divorced because marriage is a life long commitment. The Roman Catholics follow Jesse's saying "God made them male and female. For this reason a man shall leave his father and his mother and be made one with his wife, the two shall become one flesh. It follows they are no longer individuals: they one flesh...."And " Man must not separate... what God has joined together" They believe marriage is a sacred ceremony where God is present and active. When a couple have s****l intercourse the two become one person in the eyes of God. They follow Paul's words "For married people I have a command which is not own but the lords: a wife must not live her husband, but if does she must remain single or else be reconciled to her husband and a husband must not divorce his wife". As they follow this means Christians can be separated but not divorced. But in the Roman Catholic Church it is possible for a marriage to be 'annulled' which is when a marriage never took place in God's eyes. ...read more.