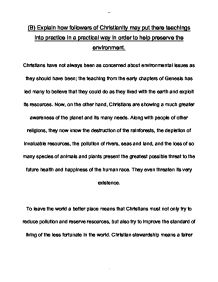 (B) Explain how followers of Christianity may put there teachings into practice in a practical way in order to help preserve the environment. Christians have not always been as concerned about environmental issues as they should have been; the teaching from the early chapters of Genesis has led many to believe that they could do as they liked with the earth and exploit its resources. Now, on the other hand, Christians are showing a much greater awareness of the planet and its many needs. Along with people of other religions, they now know the destruction of the rainforests, the depletion of invaluable resources, the pollution of rivers, seas and land, and the loss of so many species of animals and plants present the greatest possible threat to the future health and happiness of the human race. They even threaten its very existence. To leave the world a better place means that Christians must not only try to reduce pollution and reserve resources, but also try to improve the standard of living of the less fortunate in the world. ...read more.

Also, Christians could stop themselves using up so much fuel by either getting more public transport, or perhaps getting to places via a bicycle or simply even walking. To involve others, a Christian could organise car-sharing, or walk or cycle to work with friends and neighbours, to reduce the number of cars on the road and the energy consumption and pollution that result from too much traffic. They could also become involved in other's efforts by becoming involved in protests about environmental issues, taking part in marches and participating in demonstrations. IN an additional manner of protest, a Christian could involve the government, by using their vote in favour of candidates who show concern for environmental issues, or writing to their existing MP's, telling of ways in which they could help the environment. On a larger scale, a Christian could join an organisation which works to promote conservation of the earth. ...read more.

polluting fuels and promoting clean, renewable and efficient energy; for the protection of oceans and ancient forests; for the elimination of toxic chemicals; against the release of genetically modified organisms into nature; for nuclear disarmament and an end to nuclear contamination. On a smaller scale, Christians could join a group like the CEL (The Christian Ecology Link). The CEL offers believe that people are responsible for their own impact on God's creation as a whole, and they helps members to understand and relate these responsibilities to their faith. Members can then encourage others in their local church to think seriously about these issues. Even though only one of these organisations has its basis in Christianity, a Christians might choose to support ant one of them, or one of the many others campaigns, as a way of putting into practice their beliefs about stewardship and concern for others, including future generations. ?? ?? ?? ?? Alex Mullan - Y11 - Religious Studies Coursework - Religion and Science Page 1 of 3 ...read more.