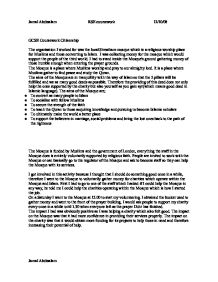 GCSE Coursework Citizenship The organisation I worked for was the local Streatham mosque which is a religious worship place for Muslims and those converting to Islam. I was collecting money for the mosque which would support the people of the third world. I had to stand inside the Mosque's ground gathering money of those humble enough when entering the prayer grounds. The Mosque is a place where Muslims worship and pray to our almighty lord. It is a place where Muslims gather to find peace and study the Quran. The aims of the Mosque are in tranquillity with the way of Islam so that the 5 pillars will be fulfilled and we as many good deeds as possible. Therefore the providing of this deed does not only help the ones supported by the charity but also yourself as you gain ayr(which means good deed in Islamic language). The aims of the Mosque are; * To convert as many people to Islam * To socialise with fellow Muslims * To secure the strength of the faith * To teach the ...read more.

On a Saturday I went to the Mosque at 12.00 to start my volunteering. I obtained the bucket used to gather money and went to the front of the prayer building. I would ask people to support my charity every once in a while until 1.30 when everyone left as the prayer Duhr has finished. The impact I had was obviously positive as I was helping a charity which also felt good. The impact on the Mosque was that it had more confidence in providing their services properly. The impact on the charity was that it would obtain more funding for its projects to help those in need and therefore increasing their potential of help. From this experience I gained the knowledge of how to volunteer for a Mosque. I learned how to help a charity which operates within a Mosque. I learned that when operating to gather money within a religious place you would have more success of obtaining the expected amount of money. ...read more.

By doing this they would feel the need to help others and therefore they would recognise the charity and fund it instead of passing it by. This experience could be built on by using the experience and skills I obtained to volunteer in a other way such as operating within the Mosque doing more complicated jobs such as helping Islamic students with their study of Islam which requires more skill than gathering money. In the future I will be helping the third world countries more often such as funding a charity with a part time job, visiting third world countries using my knowledge and skills to help the country or teach those in need reading and writing,mathematics,science and key skills which will help them when travelling to other countries. I think that poor countries do not have enough knowledge and therefore I want to give those countries knowledge will will help them permanently such as efficiently using water and ground. These improvements can be made by working for a charity voluntarily and stating my ideas of how we could improve third world countries. Jamal Abdisalam RSE coursework 12/10/08 Jamal Abdisalam ...read more.