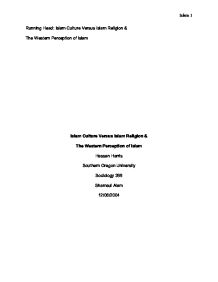 Running Head: Islam Culture Versus Islam Religion & The Western Perception of Islam Islam Culture Versus Islam Religion & The Western Perception of Islam Hassan Harris Southern Oregon University Sociology 399 Shamsul Alam 12/06/2004 Islam Culture Versus Islam Religion Throughout this course we have learned several different aspects of Islam as a culture and as a religion we have also been able to put to rest several myths that have plagued Islam in the eyes of the Western World. In this paper I will discuss the significant difference of Islam as a religion versus Islam as a culture as seen through the eyes of a Malay Muslim. I will then go on to discuss how the Western world views Islam and how it is progressively changing for the better. Islam is a religion based on the teaching of the Profit Mohammad, passed down by the angel Gabriel. But, to many Malay Muslims, Islam is a culture. It is a practice handed down by their fathers, and their father's father before that. It is something they do out of habit and tradition that than from principles of the religion. That is why by taking shadat, non-believers convert to Islam, and referred to as "Born Again Muslims" they seem to make better Muslims, because they are able to embrace the religion whole-heartedly. Converts learn the religion from scratch and throw away their old beliefs on becoming Muslims. ...read more.

It must be remembered that the bomoh uses the Qur'aan it is not used for reciting the verses but as talismans. The Qur'aan is not taken in its spirit or substance but in its physical form, as an object of magic within the culture is ok but not within the religion. Sometimes the verses are recited but only for "fixing things". The "client" may want the bomoh to help them get a job promotion, a contract they have bided for, the love of a woman or man, and other worldly desires. In extreme cases the bomoh calls upon the "powers" of the Qur'aan to harm an enemy or as a prevention from an enemy who is suspected of using another bomoh to give this client bad luck or make him sick. Which is no part Islamic or part of any teaching of the Qur'aan. Islam, or the powers of Islam, is treated as something magical or mystical, and who better to call upon the magic of the Qur'aan or the verses of the Qur'aan than a man of black magic. Of course, every bomoh would claim he is doing things the Islamic way and that there is no sin in what he is doing. This gives the Malay the feeling of security, that he is not offending God in his actions or creating an associate to God. ...read more.

Francis of Assisi and meditate on a phase of his life that has perhaps escaped a number of biographers and admirers; namely, the mysterious bonds that united the saint to the founder of Islam, the Arab prophet Muhammad." On June 22nd President Bush to offer each and every American Muslim his heartfelt best wishes on the Islamic religious Festival of Eid ul Adha (Feast of Sacrifice) on June 22. In his televised message, President Bush mentioned that Abraham's example, who was ready at God's command, to sacrifice his own son, inspires three great religions: "As children of Abraham, American Muslims gather today to honor their ancient faith. As Americans, your celebration affirms this nation's allegiance to religious freedom for all. The notion of religious tolerance lies at the heart of the American ideals. Many of our founders came here because the land promised religious tolerance." But, unfortunately, this professed religious tolerance was not demonstrated to my ancestors who were brought from Africa in chains of slavery. Millions of these slaves who were stripped of their original names and cultures, freedom and human dignity, were Muslims. Their masters not only imposed their Christian names upon them, but also got them converted to Christianity under duress. Finally, the ultimate question of who will win and who will lose, only the almighty (God/Jehovah/Allah) knows. My hope and prayer is that the healthy process of advancement in mutual respect and trust, love and compassion should always remain the real winner among Christians, Muslims and Jews - all the Children of Adam and Eve. ...read more.