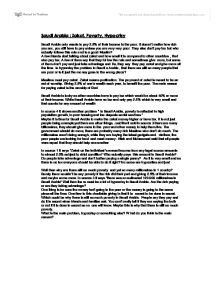 Saudi Arabia : Zakat, Poverty, Hypocrisy - Saudi Arabia only needs to pay 2.5% of their income to the poor. It doesnt matter how rich you are, you still have to pay unless you are very very poor.

Saudi Arabia : Zakat, Poverty, Hypocrisy Saudi Arabia only needs to pay 2.5% of their income to the poor. It doesn't matter how rich you are, you still have to pay unless you are very very poor. They also don't pay tax but who actually follows this rule and is a good Muslim? A few friends start talking about zakat and how small it is compared to other countries, that also pay tax. A few of them say that they follow the rule and sometimes give more, but some of them don't pay and just take advantage and lie, they say they pay zakat and give more all the time. ...read more.

It is not just people being unemployed there are other things. Just like it said in source 3 there are many billionaires, they should give more to the poor and other money to help them live. The government should do more, there are probably many rich Muslims who don't do much. The millionaires aren't doing enough, while they are buying the latest gadgets and clothes; the poor people are looking for food and need money. Allah and Muhammad said that all people were equal that they should help one another In source 1 it says "Zakat on the individual's annual income from any legal source amounts to almost 2.5% subject to strict condition" Who actually pays this amount in Saudi Arabia? ...read more.

Are the rich paying or are they taking advantage? One thing is for sure the money isn't going to the poor or the money is going to the same place all the time. One flaw to this charitable giving is that it is meant to be done in secret. Which could be why there is still so much poverty in Saudi Arabia. People say they pay and do it in secret when friends and families ask. You can't really tell if they are saying the truth or not if it is done in secret as no one will know. Maybe this is why that there is still so much poverty. What is the main problem, hypocrisy or something else? What do you think is the main reason? ?? ?? ?? ?? ...read more.