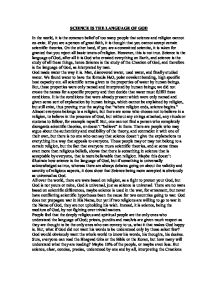 Science Is The Language Of God

SCIENCE IS THE LANGUAGE OF GOD In the world, it is the common belief of too many people that science and religion cannot co-exist. If you are a person of great faith, it is thought that you cannot accept certain scientific theories. On the other hand, if you are a committed scientist, it is taken for granted that you reject all basic tenets of religion. However, this is not true. Science is the language of God, after all it is God who created everything on Earth, and science is the study of all these things, hence Science is the study of the Creation of God, and therefore is the language of God, as interpreted by man. God made water the way it is. Man, discovered water, used water, and finally studied water. We found water to have the formula H2O, polar covalent bonding, high specific heat capacity etc. all scientific terms given to the properties of water by human beings. ...read more.

All over the world, there are wars based on religion, as a fight to protect your God, but God is not yours or mine, God is universal, just as science is universal. There are no wars based on scientific differences, maybe science is used in the war, for armament, but never have conflicting scientific hypotheses been the cause for two countries going to war. God does not propagate war in His Name, but yet if two religions are willing to go to war in the Name of God, they are not upholding his wish. Instead, it is science, being the medium of God, by not fighting over trivial matters. People feel that the deeply religious and spiritual people are the only ones who understand the language of God; priests, pundits and maulvis are given much respect as they are thought to be the only ones who can convey to us, what it that makes God happy is. ...read more.

God runs the world, agreed to by all and sundry. The world runs on science, also agreed to by everyone. Therefore, it can be said that God runs the world on science, but that can also be proved false, in the light of the recent natural calamities, in the forms of tsunamis, hurricanes, earthquakes, etc. as God's way of letting us know that we should not depend totally on science, he still exists. God may have given us science, which explains to us all that we know, but he has not given to us all the knowledge that He possesses, and that knowledge is never meant to be gained by man, and so he should not even attempt to gain it. But man is egoistic, and will continue to prove himself to be as great as God, using science to replicate all of God's creations, including himself, and the failure of this, or the end of the world, will prove that God is above all, man, religion and science. ...read more.