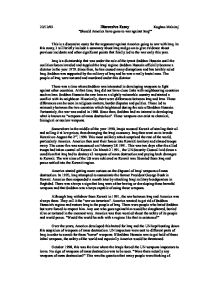 22/12/03 Discursive Essay Kughan Malairaj "Should America have gone to war against Iraq?" This is a discursive essay for the argument against America going to war with Iraq. In this essay, I will briefly include a summary about Iraq and go on to give evidence about previous incidents and other significant points that finally led to the war early this year. Iraq is a dictatorship that was under the rule of the tyrant Saddam Hussein until the coalition forces invaded and toppled the Iraqi regime. Saddam Hussein officially became a dictator in the year 1979. Since then, he has caused many disruptions and has terribly ruled Iraq. Saddam was supported by the military of Iraq and he was a really brutal man. The people of Iraq were tortured and murdered under this dictator. There was a time where Saddam was interested in developing weapons to fight against other countries. At that time, Iraq did not have close links with neighbouring countries such as Iran. Saddam Hussein the saw Iran as a slightly vulnerable country and started a conflict with its neighbour. Hisorically, there were differences between Iraq and Iran. ...read more.

Any one who goes against him would be slaughtered, buried alive or tortured in the meanest way. America was then worried about the safety of its people and world peace. "Would the world be safe with a regime like that in existence?" Over the years, America developed this hatred for Iraq and the UN kept hunting down this suspicion of weapons of mass destruction. UN inspectors were sent to different parts of Iraq in order to search for these "terror" weapons. If Saddam Hussein was to get hold of these lethal weapons, the safety of the world and especially America would be threatened. October 1998, this was the time where the Iraqis forced the UN weapons inspectors to leave. No sign of weapons of mass destruction was to be seen. "Were there actually any weapons of mass destruction?" This was the question that many people were thinking of. Some people claim that it was the false statement made by America to condemn Iraq as a "terrorist-based" country. It was not the people that were to be blamed, but Saddam Hussein and his evil regime. In 1999, Iraq rejected the UN resolution, thus not allowing any weapons inspectors to come into the country in search for these weapons. ...read more.

The Invasion of Iraq was from March 19-20. This was a coalition force consisting of US and UK forces. It beginned with air strikes to take out enemy structures and it was mainly to target members of the Iraqi regime. Later on, the troops started invading Iraq and Iraqis tried to defend their land by using any force available to them. The war went on until the regime was annihilated. There were many casualties of the war, some innocent civilians. Until now, there were no weapons of mass destruction found in Iraq. President Bush took drastic action on Iraq without any reason. There were not also complete backing from the international community to proceed in this war. Going to war is not a very democratic decision and America should have tried other civilised ways to deal with Iraq. America's plans were to go in and find weapons of mass destruction and to get rid of the Iraqi regime. They did not need to go to war to do this. The war claimed many lives of civilians and soldiers and over $93 billion spent. This money could be used for better purposes such as helping poor countries and funding useful projects. Fortunately, the leader of the regime, Saddam Hussien was finally captured later in early December 2003. ...read more.