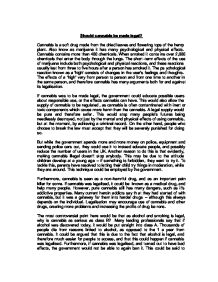 Should cannabis be legalized?

Should cannabis be made legal? Cannabis is a soft drug made from the dried leaves and flowering tops of the hemp plant. Also know as marijuana it has many psychological and physical effects. Cannabis contains more than 400 chemicals. When smoked it contains over 2,000 chemicals that enter the body through the lungs. The short-term effects of the use of marijuana include both psychological and physical reactions, and these reactions usually last from three to five hours after a person has smoked it. The psychological reaction known as a 'high' consists of changes in the user's feelings and thoughts. The effects of a 'high' vary from person to person and from one time to another in the same person, and therefore cannabis has many arguments both for and against its legalisation. ...read more.

Another reason to do this is that evidently, making cannabis illegal doesn't stop anybody. This may be due to the attitude children develop at a young age - if something is forbidden, they want to try it. To tackle this, parents have resolved to letting their child try things in moderation, while they are around. This technique could be employed by the government. Furthermore, cannabis is seen as a non-harmful drug, and as an important pain killer for some. If cannabis was legalised, it could be known as a medical drug, and help many people. However, pure cannabis still has many dangers, such as it's addictive properties. Many current heroin addicts say that they had started of with cannabis, but it was a gateway for them into harder drugs - although this always depends on the individual. ...read more.

This leads another question; if cannabis was legal, would it be right for people to be allowed to smoke cannabis in the streets? It may influence young people, who do not know what it's devastating effects can be and in effect ruining their lives. The Qur'an states that drugs are 'Satan's doing' and that you should 'shun them, so that you maintain a happy state of life', agreeing with the Bible's teaching that 'whatever you do, do it all for the glory of God', as both infer that drugs are wrong, and they ruin your life. In conclusion, there are many reasons both for and against, and it is practically impossible to assume one view-point, and change the law in relation to it. Opinions will vary throughout a singles person's life, due to experiences and observation of people close to them. ...read more.